This is a fund for researchers involved in internet-embedded applications. There is no specified budget per project, but it looks as though there could be around £350,000 per project. Proposals should focus on early stage directed research through to implementation, testing and iterative improvement of technologies or methods with potential beneficiaries. Projects must have a user partner who is actively engaged in the research.

Funding Body: EPSRC
Scheme: Research in the Wild – Internet of Things
Overview: This seeks to encourage user-driven research in the emerging area of Internet of Things- systems and methodologies that underpins internet-enabled applications, based on physical objects and the environment, seamlessly integrating into this information network.
Activities could either test new technologies and methods with potential beneficiaries in the user domain or look at new ways of using existing technologies and methods. Applications must demonstrate:
•that the research challenge has been co-created with an end-user from the public, private or third sector;
•that the research will be conducted ‘in the wild’, exposing it to potential beneficiaries;
•that the potential impact of the research will be realised by the end-users or related beneficiaries.
Budget: Up to £3.5 million is available to fund approximately 10 projects for a duration of 18 months
Deadlines: 24/10/13
Further Information: http://www.epsrc.ac.uk/funding/calls/2013/Pages/internetofthings.aspx 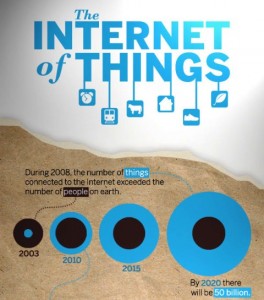 Summary
The European Commission has recently published the both the results of its public consultation on the ‘Internet of Things’ and the output from an expert group. The conclusions will feed into the development of future policy. The European Commission will also work closely with the CONNECT Advisory Forum for ICT (Information and Communication Technologies) Research and Innovation on this.

Background
Internet of Things (IoT) is a long term technology and market development based on the connection of everyday objects to the Internet. Connected objects exchange, aggregate and process information on their physical environment to provide value added services to end-users, from individuals to companies to society as a whole.

Therefore IoT could potentially improve the life of EU citizens and tackle societal challenges, such as health and transport, and create job opportunities in Europe. On the other hand, it also will create risks for citizens for example with privacy and security.

Consultation
The European Commission held a public consultation to gather views on the policy approach needed for a dynamic development of the IoT in the digital single market whilst also ensuring appropriate protection citizens. Over 600 responses were submitted to the consultation, which was held in Spring 2012.

Conclusions of Consultation
During the consultation, there was no consensus about whether public intervention is needed for the IoT, and if so, what the scope of the intervention should be.

Many respondents (mainly from industry, but backed by several academics and individuals) felt that public intervention is not needed since the sector is still in its infancy. They felt policy measures should be developed at a later stage and that the existing legal framework already protects the end-user. They suggest that, ongoing standardisation work on identification, IoT architecture or security will foster a competitive and safe development of IoT applications. Some respondents also stressed that inappropriate governance will raise barriers to investment and innovation.

By contrast, many individual respondents, civil society and consumer associations claimed that economic considerations are secondary when fundamental rights like privacy, security and other ethical issues are at stake. They stressed the need to protect the rights of end-users and raised concerns that the IoT market would not develop in a competitive way and that consumers may get locked in certain technologies. In their view, IoT specific rules should be developed and enforced to control the development of IoT technologies and markets. They conclude that a multi stakeholder platform, securing appropriate representation of civil society, is needed to address IoT governance issues.

Next Steps
The European Commission will develop future policy initiatives based on the consultation and expert report. It will also work with the CONNECT Advisory Forum for ICT Research and Innovation, which is known as CAF.