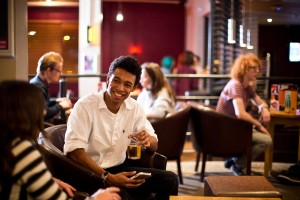 In my first year of University I went out quite frequently. At first, I wouldn’t really base my nights out in Stoke, I would travel out to other universities, as Staffordshire University is based in the Midlands, it was very easy (and cheap!) to travel to other areas in the Midlands. I would go clubbing in Manchester, Leicester, Birmingham and Coventry (avoid Coventry unless you don’t mind waiting in McDonald’s for 6 hours because the event got shut down). I then realised that constantly travelling was having an affect on my bank balance so me and my friends decided to finally see what Stoke had to offer. For one of our flatmates birthday we went to Couture which is based in Stafford, they have different rooms full of music for everyone and anyone, you’re sure to find a room that’s perfect for you and if it’s your birthday you’ll get a free bottle of champagne which is a bonus. Being students, especially first year I know we all like our drink which makes going to Couture a great night out as drinks are really cheap.

In Stoke there is also the city centre (Hanley) where all the clubs are such as Fiction, Touch and Individual to name but a few. Fiction (formally known as Liquid) has undergone a recent refurbishment making the club even better than it was before! On most nights out there are two floors of music, the first floor being pop and dance music whereas the top floor has R&B and Hip hop catering to all music tastes, with guest DJ’s also appearing. Individual is one of the more popular clubs as it’s always packed up on Friday nights with students due to the great DJ’s and cheap drinks. Touch is also another club popular with students.

A good thing about Hanley’s club scene is that after a night out there are taxi’s waiting to take people home, although the prices are more expensive in the evening than the daytime, they are still very affordable prices especially if you’re going home in groups. There are also food shops right beside the club for the hungry or for those who need a little sobering up.

My favourite place in Stoke to have a night out would be LRV which is based on the Leek Road Campus. On Wednesdays they have Gobble which is a themed night out for those who enjoy dressing up and on Fridays there is Refresh where you can wear whatever you like (I prefer Refresh). On Fridays, both Verve and LRV are open; in LRV there is pop music, house and sometimes old school music whereas in Verve there is R&B and Hip Hop, Afrobeats and Bashment music. Verve also sell food for a limited time.

Overall, there is plenty to do in Stoke for those students who want a good night out and I promise you will not be disappointed!

Being A Student Ambassador: Survival Tips