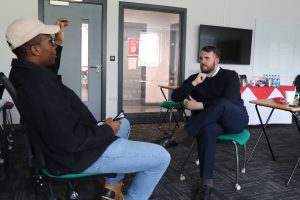 I had the chance to sit down and speak to him, to find out why he feels this and what he is doing to enable Stoke-On-Trent to support the existing game developer and professional gamers while also attempting to become one of the UK’s major gaming hubs.

The current value of the entire video game industry is at $90 billion, which is greater than the global box-office and music industry revenue combined. The video game market was also one of the few markets that actually grew during covid and is forecast to reach $250 billion+ by 2025.

So, financially it’s easy to see why investing in a rapidly growing market would be beneficial for a city.

However, Mr. Gullis is more interested in how the gaming industry can help to root the yearly stream of students that enter Stoke-On-Trent here for the long term. Staffordshire University is the leader in video game-related courses, so it attracts many aspiring students who want a career within games (including myself). But Mr. Gullis found that once people finish their degree, they are off to the other major UK cities such as Manchester or London to start their career.

Building the Spode-Works Gaming Hub in association with Staffs Uni students, is one of the ways they have tried to create this incentive. This hub is equipped with a wide range of equipment for both game development and other media, to support businesses and provide a place for all students (GCSE – University level) in stoke to practice using that equipment.

They have even recently installed 1Gigabit fibre-net into the city, so once this becomes accessible to residents and workplaces, working on the cloud will become much faster and reliable. This is essential for this industry that often has collaborations between people in different regions and countries.

Additionally, the actual setting of this interview was at the start of the ‘Stoke-ON-TREND’ games jam, where the winners of it get the opportunity to turn their jam game into a full-fledged commercial one.

I highlighted that those are great, as for an indie studio anything that minimises risks and helps promote the studio’s game, are huge incentives for one to stay. At least in my opinion.

We also discussed how having free/low-cost game development specialised working environments, grants for start-ups, and more events to showcase products – especially ones open to publishers – would all be key for building a game development hub native to Stoke-on-Trent. At least one that exists outside the educational sector.

After this interview, I personally felt a lot more optimistic about the future of gaming in Stoke. Even before this talk, I had never excluded Stoke as a potential place for me to settle after my degree. However, after it, Stoke is now one of my stronger choices as the city is actively changing to accommodate people with aspirations like mine.

Catching up when you come through Clearing