(Yes, I know… I’ve gone as far as using the Star Wars prequel titles in my blogs)

Hello everyone (I promise I’ll stop with all these new paragraphs.) It’s been a while. So let’s skip the reading week and Halloween altogether (I’ll explain later). It’s now the 1st November 2015 and you do know what that means, don’t cha? . Fallout 4 gets released in exactly nine days’ time and future me will already be at the midnight launch in Hanley. Hopefully. I know… you can’t take me anywhere.

Now to give you an explanation. I do believe I owe you one. The reason I said to miss out on the reading week as well as Halloween altogether was because I spent pretty much all that time playing the newly released Assassins Creed Syndicate. Let me tell you this, it’s definitely as good as they say it is. But that’s enough gaming talk for this blog. I hope everyone had a wonderful half term and Halloween and also remembered to do their essays (Believe me… I didn’t until the last day or two.) I am looking forward to travel back to my uni accommodation and divulge in drinking green tea and returning to my life of studying, presenting and let’s face it… playing video games.

I am back again. I know it’s only been a few days since my last entry but I promise that this one is definitely worth it.

You see, being a student at university does open many doors for you so early on in the course and that is exactly what happened to me and my two fellow classmates Alex and Rebecca. As I’m writing this on the evening of 4th November 2015, my day has been filled with a trip over to BBC Radio Stoke where I (of course) and my friends had the opportunity to the interview broadcast journalist Terry Goodwin.

The whole experience was wonderful. To be able to be given such access of not only being able to interview but given a tour around the industry which I really want to work in, it’s wonderful. This just proves what great opportunities the university can offer you. It’s up to you whether you want to take them or not. I’d like to give a special shout-out to Rebecca who managed to set up the interview in the first place. You’re a star!

Now my readers, it’s that time again. I must say adieu but I’ll be back soon… after all we have a certain midnight launch to talk about.

Hmm. I’m not sure about that blog title but then again it’s currently 1am. So, here we are once again. Me, you and this wonderful cup of green tea. Right now, I am shattered but it’s been worth it as its FALLOUT 4 day.

Yes, I just came back less than an hour ago from the midnight launch in Hanley and it has been rather good if not tiring. All that running reminded me of my old cross country days. I do miss those days.

So! First of all. Whenever midnight launches are concerned, it’s wise to always arrive a few hours earlier. It’s a common rule and rather logical if you think about it. You have to make sure you can get as early in front of the queue as possible, especially when free merchandise is concerned. I wasn’t going to miss my chance in claiming all the Fallout 4 merchandise that was being handed out to the early qeuers.

I do believe I was rather smug that evening as I had already pre-ordered the Pip Boy Edition of Fallout 4 back in June but that smug look did not last long. I can assure you that now. While my game arrived perfectly on time via delivery, I shan’t be playing it for another two weeks. This is because I forgot that my game would be delivered to my house instead of my accommodation.

On the bright side… I did get a mask and a poster.

How are my fams? I hope you are feeling great because today has been absolutely wonderful. Why? Because it’s Children in Need. Well technically the big CIN show won’t be on until Friday but the wonderful university radio station OMG (One Media Group) held their very own 48 Hour Live Broadcast Event for Children in Need. Let me tell you this. I’ve never had the wonderful opportunity to meet such a dedicated team who were pulling off such an amazing feat for an amazing cause. Luckily being a radio student myself, I had the opportunity to join in with the 48 Hour Live Broadcast by featuring as both a presenter and a guest (for the Bhangra Power Hour with Jusi Sahota) for two hours of the 48 hour broadcast

I love charity. I come from a very charitable family as it’s in our 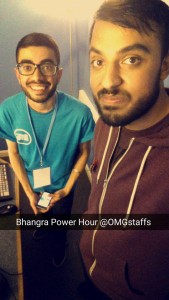 culture to help those in need. My mother especially helps by donating food, toys, clothes and money whenever she can and I am blessed to have been able to be brought up in such a household.

I know this entry was short but it was definitely sweet.

Until the next time my friends.