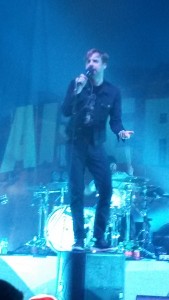 I’m what I’d now consider a Leeds lad having been in the city since I was 8 years old and it’s really become a part of me now. “You can take the boy out of the city but you can’t take the city out of the boy” would best describe it. One of the very first things about Leeds I fell in love with aside from rugby league was….the Kaiser Chiefs!
Famous for songs like Ruby, I Predict a Riot and Everyday I Love You Less and Less, they are somewhat of a Leeds icon and like every great band nothing beats a home town gig! There is something about going to a concert or “gig” that is very addictive. The rush you get from jumping up and down, going crazy and just letting yourself go, hearing your favourite band play the songs you’ve heard 100 times over on your iPod live, and being inches from the people you see on TV, just nothing compares for me! I always come away wanting more and more, looking for the next time they are playing live.

This night’s gig was something special, a charity gig to support Leeds Children’s Charity and CLIC Sargent. The band played all the hits from their first album right through to their most recent album Education, Education, Education and War. For me though, a personal highlight of the night was the band covering Christmas songs! It was something different unusual and not something you often see acts do. It made the night something special and unique, they’ve never had a Christmas album but now I really want them to make one! 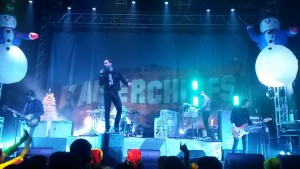 They had help from what I may only assume was a Gospel choir, they had impeccable voices hitting high notes and harmonies on point! And to top it all off they made it snow indoors which all put together made for an amazing Christmassy atmosphere. I’m not usually one for getting caught up in the Christmas hype but even this got me swaying!
If you’ve not heard of the band (have you been living under a rock?!) or only heard a few songs or…you’ve never thought they were your type, I urge you to go check them out! They have a song for everyone young or old, I guarantee you will find a song in their back catalogue that is bound to get your foot tapping or head shaking!