The second semester of my second year was a real turning point for me!

During the first year I tried hard but was mainly more concerned about meeting new people and having a good time living away from home. That continued into the second year a little but I worked harder as I knew it was a more important year. I didn’t particularly enjoy the modules in the first semester of the second year but as November approached the class was encouraged to enter a design competition. This meant a brief that wasn’t just made up by the lecturers, it was set by design professionals. I can’t remember the exact prizes but I think there may have been money if not, placements at Manchester based design studios were up for grabs. We were told to start looking at the multiple briefs that were set and start doing some research to show for when we got back in the New Year.

I decided it was really time to start pushing myself so that come the third and final year I was already in the swing of working solidly. I did a considerable amount of work over the Christmas period and had produced potential ideas and designs for the brief that was set. My lecturers were delighted to see how far I had got, this gave me a real headstart compared to my class mates which, in turn, meant I could spend more time getting ahead on the other projects that had been set. 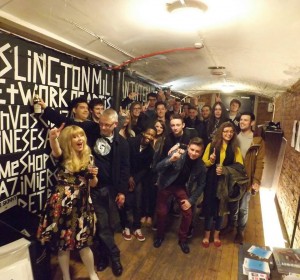 Unfortunately I didn’t win the competition but attended the award ceremony (pictured) which was good fun and was an opportunity to meet some designers from Manchester and look at the competition from other universities. Having got ahead on my other projects meant I had time to refine my designs which meant I achieved good grades for that semester. I really started to get passionate about graphic design and read many great design books so when it came to third year I was ready to absolutely smash it!

It doesn’t have to be the second semester of the second year that you start to focus, for me it was perfect timing but even if you are a third year there is still time to really push yourself and achieve a lot within the next 6 months of 2016.