Unless you’ve been hiding from the global phenomenon that is Game of Thrones (I don’t believe you if you say you have, you cant escape. Winter is coming) then I’m sure that you know that the new Season 6 is set to kick off very soon.

I’m very excited for this, however I don’t know about anyone else, but I have forgotten a lot of what actually happened, and need a bit of a refresher.

Hopefully this blog will get you up to date on everything Game of Thrones related before it comes back to our screens on April 25.

I’ll start with the biggie which is hard do forget:

Last seasons finale was a horrible watch for anyone who cares about the loveable Snow and the Nightswatch.

Now, despite being incredibly tight lipped, Kit Harrington was on the set for Season 6. So I for one am certainly hoping for the return of Jon Snow in this series.

Seeing as it would be logical to lead on from the next recap is:

The last time we saw Sansa she was jumping off the walls of Winterfell with Reek/Theon.

Personally I was sceptical that they would survive that jump, but hey, there are dragons, I wont dwell on that too much. 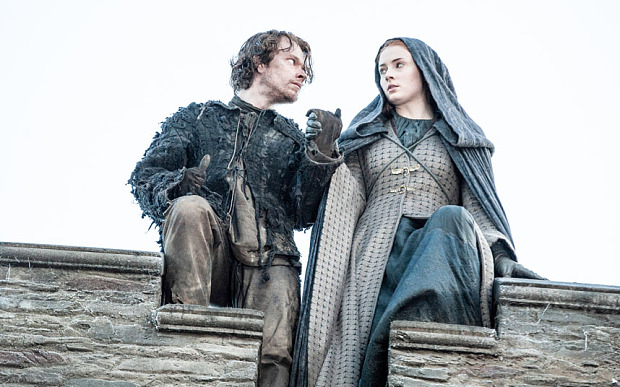 The pair escape after mental and physical torture at the hands of Ramsay Bolton, who is currently holding Winterfell with his father Roose.

In all of the madness that is this show, Theon kills Ramsays slightly unhinged girlfriend Myranda. This probably means that Ramsay is 110% out for blood and will want his two playthings back ASAP.

Just incase anyone forgot too, Brienne abandoned Sansa in her time of need by deciding to avenge Renlys death by killing Stannis Baratheon.
All that really means is that all the Baratheons are dead. Boom. Finito. End of the line for them.

Now to the family that everyone loves to hate! THE LANNISTERS  – AKA Kings Landing update.

To put it bluntly, it was kicking off in Kings Landing the last time that we saw it.

Cersei  was walking naked through the streets for one of her many indiscretions. At this point I’m not sure what family member she was being punished for sleeping with. (But she did militarise The Faith.. so again her own fault really…)

Margaery and Loras Tyrell are also still in prison, for being gay and for knowing that her sibling was gay.

Also Jamie returns with a dead daughter after seriously cocking up in Dorne and fighting those mental sisters with Bronn.

Now Littlefinger. I can never quite make him out. One minute he’s protecting Sansa. The next he’s promising to kill her and the Boltons in exchange for being named Warden of the North… because that’s gone so well for everyone else so far.

Now on to the ever depleting STARK’S.

Bran, Hodor and Meera Reed have been completely absent from Season 5. However trailers see them return looking a lot older than before… but they’re definitely alive after meeting with the Three-Eyed Raven. Fab.

I already covered what Sansa has been up to, so lets move on to the recently blinded Arya Stark.

When we last saw her she had been blinded by her trainer at the House of Black and White  – because she wanteed to cross Se Meryn Trant off her kill list, and didn’t kill her target.

Personally I hope that she crosses Cersei off that list this season. But thats just me.

And finally to round up this actually rather long update now I read it back.

Basically Daenerys left the fighting pits of Essos on the back of Drogo, who fought of the Sons of the Harpy like a boss.

Now while she left her remaining two dragons behind, she seems now to have finally bonded with Drogo – the trouble dragon.

In her absence Tyrion Lannister (My favourite of the despicable fam) is left with Jorah, Missandei, Grey Worm Daario Naharis an of course Varys.

Daenerys was left in the middle of a Dothraki hoard at the end of Season 5… Which I think brings everyone up to date!

I for one will forget about the mountain of work that I have to do in order to watch the new season!

If you can’t wait watch the trailer below 🙂