Surprisingly considering I am studying Radio Production at Staffs, I’ve been volunteering in radio stations since I was 16 years old. I started off in Hospital Radio Chelmsford, where I worked 3 shows a week (2 request shows, visiting the patients and hearing wonderful stories, and 1 show on my own.), I loved HRC dearly through my later teenager-hood and started off last year with a Best Newcomer nomination in the hospital broadcasting awards, reaching the top 10 in the country!

I’ve also been part of my current radio station Chelmsford Community Radio for almost three years and I love it there. I started off with a little saturday show called the Will and Becky show where we did crazy themed shows like Pirate week and Space week and I even got to interview NASA, which was pretty awesome. I then made the move fully to CCR at the start of summer last year when I was offered the Drivetime slot on the station!

So anyway, enough with the back history, but you are caught up with my small voluntary radio career. My favourite part of summer is doing outside broadcasts with the station. Basically meaning we take our huge broadcasting truck (it has a radio station INSIDE IT!), across Essex and broadcast outside from wherever we are. I love it, it’s like an adventure! 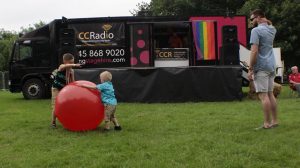 I mean look at it, isn’t it awesome!!! It’s my third favourite place in the world which is a bit bizarre I know but I love it so much! Anyway this weekend was my favourite outside broadcast of the year, we were again invited to broadcast from Essex Pride. As camera-woman of the CCR YouTube team, I can normally be found running around the field filming things like a crazy lady.

Essex Pride 2016 was incredible with SClub and Stooshe performing on the stage which was awesome! I was also lucky enough to go backstage with my lovely station manager Hal and presenter Simon to interview Stooshe, who were just the sweetest ladies ever! I was kind of sad that I didn’t get in on these photos to be fair! 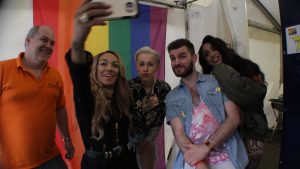 Being part of CCR has given me valuable experience towards my future career in radio and I love being able to share my stories and experiences with my uni friends. After the craziness of the weekend I then have the task of editing through the footage collected from the event. So after almost two solid days of work, Chelmsford Community Radio are proud of present our Essex Pride 2016:

3 Reasons Why Work Experience Is Important

Why the student experience is SO important to so many…