First and foremost, DO NOT PANIC! You made it. You are a university student. Congratulations for getting this far! Now take a breath, take a moment, and relax.

For a lot of you, this is the first time moving away from home and living independently, which can be quite daunting. Especially when you find out that your lack of a maintenance loan means you end up living on Pot Noodles and baked beans on toast, and you begin to be haunted by a milk-stealing ghost, who ends up being the guy from the next flat over, who somehow always finds his way into your halls. But let’s not focus on that right now. You’ve got all that to look forward to!

University is a place where anything and everything can happen. Literally. One time my flatmates and I were bored, and ended up wrapping me head-to-toe in cling film, then paraded me around campus, trying to flog me off to the highest bidder. It was quite the look… 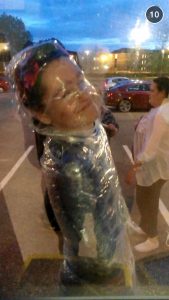 Unfortunately (or maybe fortunately) no offers were made, and I was released. One minute you are in a 2-hour lecture, trying to keep your eyes open after going at it too hard the night before at Gobble, the next you find yourself having a movie night with your flat, who have all dragged out their mattresses to make the kitchen floor not so unbearable to sit on.

If you take one piece of advice from anyone about going to university and starting a new chapter in your life, it is this; University is what you make of it. A friend of mine who went to a different university a year ahead of me, told me about how miserable she was, and how lonely she felt, because she didn’t do anything for the first few weeks she was there. She told me, and now I am telling you, that you need to go out there and get involved in anything and everything that you can.

Welcome Week is an important week, not only for the university and Student Union to introduce you to university life, but for you to gain as much experience, and meet as many new people as you can. Go to the clubs and societies fair, and put your name down on the emailing lists for as many groups as possible. Get involved with a group of people that you normally wouldn’t come across (I recommend checking out the Liberation Networks). Try something new, or something out of your comfort zone, that you would never consider doing before.

Enter me, 2 years ago from now. Wide-eyed and not knowing what to do with myself, I am trying to find a way to bond with my new, straight, guy friends. An opportunity arises. A five-a-side football match is being played on the AstroTurf near halls, and our flat wants to make a team. Notice my surprise when the guys choose me as their 5th and final member. Every instinct in my body cries out to politely decline, but I don’t. See me, 10 minutes later, stuck in goal position surrounded by 6ft guys who are way more into this than I am. I am intimidated by all of them, and it shows. Find me, some time later, haven been complimented on my surprising goal-keeping abilities, playing a game that I normally would hate even watching, but having the time of my life.

Now I never played football from that day since, but that is beside the point. I made a memory, which will stick with me hopefully for the rest of my life. I put myself out there, and because of it, I made new friends. Over the course of a year, those friends became like a second-family to me.

So get out there, and get involved! You may surprise yourself.

Need some help or advice? Send in a question today by commenting on this post below! A private message will be sent to me and the team, where I can answer them in the new Agony Aunt series ‘Dear Drew’.

Six Thoughts Every Graduate Has

What My Second Year at Uni Taught Me

It’s far from being over!