“You can choose your friends but you sho’ can’t choose your family, an’ they’re still kin to you no matter whether you acknowledge ’em or not, and it makes you look right silly when you don’t.” – Harper Lee To Kill A Mockingbird

We have this Indian tradition known as ‘Raksha Bandhan’ which translates as ‘Bond of Protection’ which is celebrated each year to honour the relationship between brothers and sisters. It’s a wonderful event in which a sister ties a ‘Rakhri’ or a band around the brother’s wrist. I wanted to ask my sister what’s her take on being a sibling, and this is what she had to say… 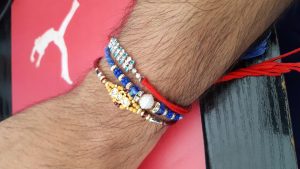 Sibling rivalry has been the core of many family disputes throughout time. It is the base of having a brother or sister, or both in which arguing and fighting can occur on a daily basis. Getting attention from the parents is a vital attribute where the child is hungry to receive from an early age. When another child is brought into it, the competition begins.

The new born becomes the centre of attention. “The first born child” let’s call them in this case, is finally given a bit of freedom where they are able to observe from a distance. The new given space is an unusual time for the child as they are now given an area to explore on their own. However, the freedom of space is not what the child desires they want to be seen as the main child in their parents eyes.

The child will now do anything to get the attention, even if this means getting in the bad books of their parents. Being loud and obnoxious is their main agenda.

However, when the child grows up they will finally realise the importance of looking over their sibling(s). The rivalry will always be there, in whatever way, shape or form. This will maintain the base of their sibling rivalry. You can only learn from your mistakes, try and resolve them and then finally move on. This is life. This is sibling rivalry. – Mandy Lee Kaur (My 17 year old sister).

She does bring up a good point, almost all siblings have this common agenda to be the ‘apple in their parent’s eyes’. Growing up, I practically played the role of not only as a brother but a mentor to my sisters. Even now, I play the role despite being at university. I think even through all the bickering and fighting that siblings go through, when you’re all grown up, you can look back at the memories and laugh.

I was talking about this subject not that long ago with a friend of mine and we both came to a conclusion of how time really passes back at home, while we are busy at university. I had spent so long at uni, which I still had this picture in my mind of how everything looked before I left. How my sister had just started her second year at college while my other sister had started year 5. I must admit, going back home for the summer break, I was left astounded how much they had accomplished and how tall they had grown.

I think part of me was slightly sad at seeing how quickly time passes, but it’s also wonderful to see how far they both had come and how busy they had been living their lives.

Even another friend of mine who doesn’t have siblings themselves, was telling me how much responsibilities they had learned from growing up with their cousins.

Being an older brother, sure can be hard at times but honestly, I wouldn’t change it for the world.

Zach on love and relationships…