Theme parks, something very topical at the moment but for me, they are my addiction. From November I count down to the following March to know how long until I can get my next thrill fix, maybe it’s an engineer thing maybe it’s a theme park enthusiast thing…maybe it’s both but I just can’t get enough!

Theme park season for me this year started with a trip to Chessington World of Adventure, if you’ve never been it’s not a thrill park but more aimed at

families with rides such as bubble works, which is a water boat ride where you go through a scientists whacky laboratory or Tomb blaster where you fire a laser gun at mummy’s. I love going through the zoo they have there. All the crazy animals you can think of and not to mention the lions and monkey’s which make for amusing viewing. Adult or child you really can’t resist having fun, it’s a great laugh however it’s a good 3 hour drive from Staffordshire so I only make it twice a year.

The following day was spent at Thorpe Park “the nations thrill capital” with Saw the ride, The Swarm and Stealth. Thorpe park really has it for thrill 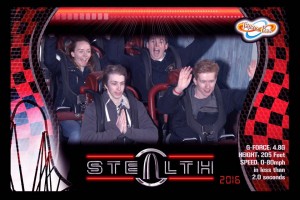 seekers, however on this trip some of the rides weren’t open like The swarm so if I didn’t have a reason to go back this season I do now. I didn’t need a reason because Thorpe have already given me and anyone interested in theme parks two very good ones…firstly none other than Darren Browns Ghost Train, if you haven’t heard of this yet, how ?! It’s been everywhere so you must have been living under a rock or something. It’s a modern take on the Ghost train, designed and developed by Darren Brown himself, it has cost the park a company record which is yet to be released but it’ll feature a full size suspended Victorian carriage and virtual reality it just gets better and better the more they tease! The second reason is Fright Nights the parks annual Halloween event, months away I know but always something to look forward to, because as a result of last year’s trip I know Thorpe know how to celebrate with scares!

My final trip to start the theme park season was to the best theme park…Alton Towers. Now I know this currently may be controversial however I have to state that as a huge follower of the park and a large understanding of the day to day running of the park, I have full faith in the park, its management and staff. So when I say I ran to be the first back on The Smiler 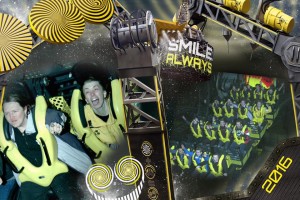 I did it and succeeded because I’ve loved that ride even before it was built. I’d been waiting for so long and when I finally got back on I enjoyed the ride so much I can came off smiling. 1000’s more agreed with me though because the ride had a 90+ minute queue all day. When the park opened this season it seemed a bit odd too, so rides were closed, but there did feel like some of the magic had returned and the escapism was present once again. The parks next ride SW8 (the code name for it) is being teased and excitement can build. If you go to from the Stoke-on-Trent campus Alton Towers is 20/25 minutes’ drive away it’s practically on your door step. I find myself there most weeks sometimes I use it as an escape from uni life, a way to wind down relax and let my hair down.

I’ll be visiting the parks as well as other Merlin attractions throughout the year such as The Dungeons and Sealife Centre’s so I shall keep you posted particularly when Darren Browns Ghost Train opens I’ll be trotting off to Thorpe Park and post my thoughts and pictures so be sure to keep an eye out for that! 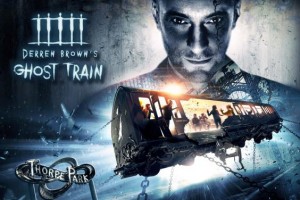 Halloween Costumes on a Student Budget