As a student mental health nurse at Staffordshire, I’ve always wanted to explore another healthcare setting and have been particularly interested in seeing how mental health is viewed in a developing country. As well, like many students, I’ve also been bitten by the travel bug! So what better way to combine my passions for mental health care and travel than to take a nursing elective abroad? Earlier in the year I did just that, and took one of my hospital placements in Sri Lanka, with healthcare elective specialists Work the World. 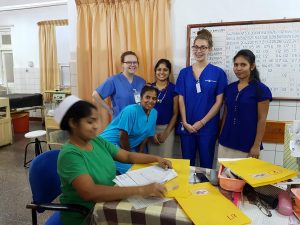 The journey to Sri Lanka was long and tiring – 26 hours in total. I arrived at the airport at 4am Sri Lankan time and slept through most of the journey to the house. Before I fell asleep, we were told that because we were driving at night, at some parts of the rural roads we may see wild elephants. You would have thought this would be enough to keep me awake. It did, for two hours, and then I drifted off.

The next day, when I first arrived at the hospital in Anuradhapura (one of the country’s ancient capitals) I was taken aback by the size of the hospital, with many open areas. There was a lot about the hospital that surprised me, however it was well functioning despite its clear lack of resources. There were visitors and patients absolutely everywhere, in the waiting areas outside, walking around the grounds, and standing around the wards. Everything is done on paper; there are no computers, and all patient notes are written in books, which the patients keep on their person and bring with them to whichever department they attend. The patients are also seen on a first come, first serve basis.

I also met the hospital nursing superintendent who is in charge of the whole hospital. He spoke to me about my placement and the opportunities that there is for me on their wards. He took a liking to my last name and proceeded to call me “Flowers” for the rest of the day to all of the staff that we met! There are two wards, one female and one male, there is also a clinic, too. I spent time on time on the female unit observing ward round. During the ward round I saw patients with varied diagnosis’ from schizophrenia to bipolar and depression. Due to Sri-Lanka’s civil war, that lasted for 26 years and only ended in 2009, there are now a lot of cases of PTSD (post traumatic stress disorder) on the wards. 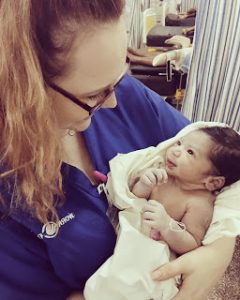 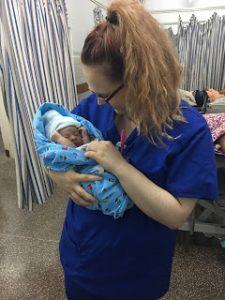 The consultant psychiatrist that supervised me with fully took me under his wing. He explained patients’ cases to me, asked my opinion and got me to explain how I came to my conclusions, all in English. Working closely with this consultant advanced my skills on assessments and documentation writing hugely. I was also taken on prison visits, where we conducted ‘mental state’ examinations, which are used in courts with regards to patient’s’ upcoming trials. It became apparent that prison wasn’t only used for rehabilitation for criminals in Sri Lanka–it was also used as a safehouse for the mentally unstable.

One man we assessed was 87 years old and had severe dementia and nothing he said (or heard) made sense. It transpired he had been arrested because he was found wandering the streets, speaking incoherently, but had not committed any crime. In Sri Lanka, sheltered housing for the elderly isn’t common, so there was no other option for the police but to put him in prison. Another man, 27, lost both his parents and brother in the space of a few months and sunk into a deep depression. A concerned neighbour reported him to the police, and soon after he found himself imprisoned rather than receiving psychological support, like he might in the UK.

I also saw women on the prison visits, who reported domestic violence, financial and environmental stressors as a reason for their actions. While being assessed, family members were allowed in to sit next to their relative, the consultant asked them questions to help find out more about the patient. There is no confidentiality in any part of the healthcare system; on the ward, in the consultant’s office (the door stays open) and in the prisons and clinics. Everyone can hear anyone else’s conversations, including assessment and diagnosis.

During my time in Sri Lanka, I also spent some time in paediatrics. First I went to the pediatric Thalassemia ward. Thalassemia is a hereditary hemolytic disease which is caused by an abnormality in hemoglobin in the body, and is common in African and Asian countries. The children aged from just months old to children aged 14 and 15, mostly coming in for their monthly blood transfusion. The children are all sat in one large room with their beds 3ft apart from each other, no privacy curtains and the children are just lay in beds with their blood bags hooked up above their bed. It was amazing to see how the children just unhook the bags when they are empty and walk over to the nurses for them to be taken out. About 30 minutes later the nurses call over the children one by one to pick up their saline drip and attach it to their cannula. The morning I was there they had more than 16 children arrive for their transfusion. They were all so brave and not one cried or looked unhappy. They were all more than willing to play games with me and talk to me. 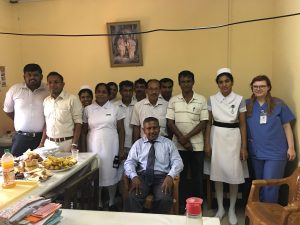 I also spent a day on the labour ward. I had the experience of watching the doctors break women’s waters, and to see births right before my eyes – not something a mental health nurse would likely see in the UK! The women aren’t allowed a birthing partner, and there is no option for any pain relief like epidurals, or even gas and air, and around 90% of labours involve an episiotomy (cutting the vagina to allow the baby through). After the birth of the baby, it is taken straight away to be measured and to have its observations taken. They don’t do skin to skin contact here, and the mother only gets to see the gender of the baby once the midwife has done the checks and dressed the baby. The nurses work so hard on the labour ward, and within the 4 hours of me being there they had more than 7 births with only a small number of midwives. Within an hour of birth, a doctor will come along to stitch the mother back up, then feed her child with help from the midwives, and then be transferred to the postnatal ward.

Back in mental health, I was surprised to see that treatment and medication were similar to what we offer back home, however, in Sri Lanka where you live dictates the medication you can take. If a patient needs medication that isn’t available in their town, they have to travel to buy it. If they can’t afford to buy it, which was often the case, they couldn’t have it, unless they travelled to hospital every time it ran out. Because of this, we often saw very late stage presentations that could have been avoided with earlier intervention.

I came to realise how lucky we are to have the services that the UK provides to support those with mental illness. However, I also realised that there are still things that need to be looked at back home with regards to mental health care. For example, the hospital wards in Sri Lanka always had at least 5 staff on each ward, where understaffing is a problem in England. By contrast, Sri Lanka has a problem with a lack of services, which is something that the UK has, by comparison, an abundance of. I think it’s important to focus on the positives in both countries, and there are positives in everything!

19 reasons why I’m #AllStokedUp about Stoke…

How to Prepare For Arriving in UK?