See below for full details of the task set out by our BA (Hons) Animation course team and get creative. Make sure to keep your eyes peeled for our Games & Concept Art Challenge coming soon too! 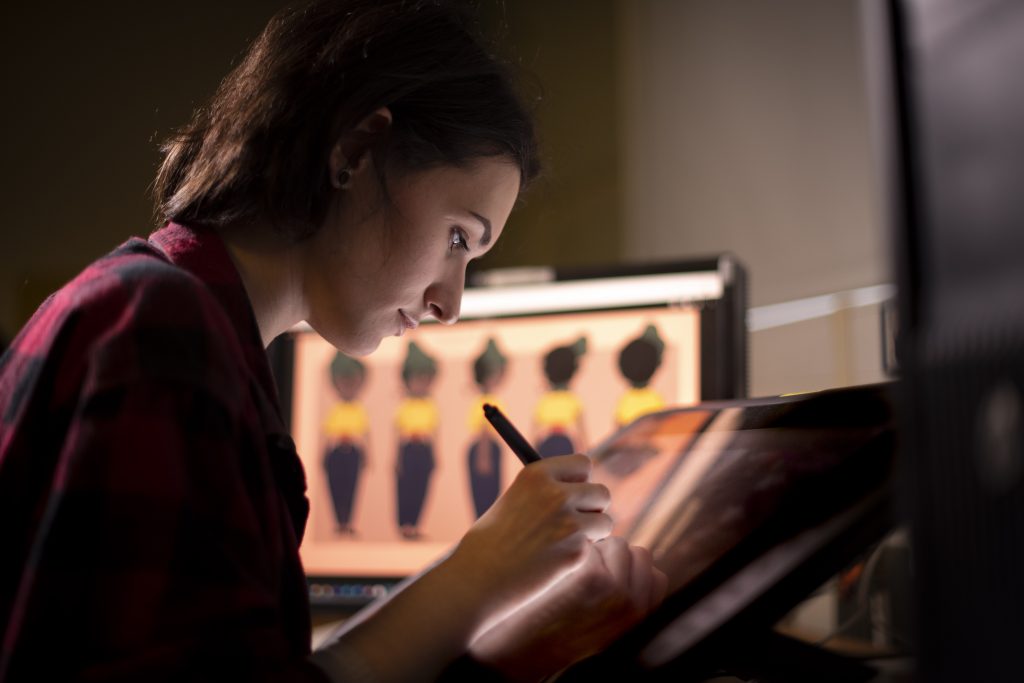 Think you’ve got what it takes to be the next shining star of journalism? Enjoy writing? Love being in front of a camera? We have the perfect opportunity for you!

The Future Journalist Awards is your chance to show off your writing or filming skills and win some awesome prizes.

Organised by Staffordshire University with the support of StaffsLive, the competition aims to discover the next generation of journalists in and around Staffordshire.

How we interact with media is changing and today’s journalists requires digital skills to stay ahead.

This year, contestants can choose between submitting a piece of written content, such as an article, review or blog, or they can opt to create a short video or audio clip using a smartphone.

END_OF_DOCUMENT_TOKEN_TO_BE_REPLACED

Students have earned industry recognition for a moving documentary inspired by the Nazi Occupation of the Channel Islands.

Chris Steers and Kelvin Andrews, both studying BA (Hons) Film, Television and Radio at Staffordshire University, won silver in the Best Speech Category at the Student Radio Awards this month.

For five years the Channel Islands became the only part of the British Isles to be Occupied by the Germans during World War 2 and ‘Love, Art and Radio Resistance’ tells the tale of two women who launched a fearless yet silent campaign to undermine the regime.

It’s been a really exciting project to be able to raise the profile of the school choir and offer our expertise and resources to create, record, produce and release the single and video to raise money for a charity which has touched so many people’s lives.
Matt Brindley-Sadler, Associate Dean

The song, which was recorded and produced in Staffordshire University’s state of the art Cadman Studios, is in memory of their former teacher Craig Beverley who received end of life care from the Stoke-on-Trent Hospice.

University staff and students from Music and Sound have helped the choir arrange, record, produce and launch the charity single. Associate professor Marc Estibeiro and Head of Department Luke Scott have also supported the choir at their performances, including University Open Days and the academy’s annual concert, and have been able to offer advice, guidance and mentoring in relation to producing the single.

Specialist equipment which ensures that students are at the forefront of cutting-edge technologies has been unveiled this week.

This is just one example of the University’s innovative approach which is putting Staffordshire at the forefront of digital and technological education and will help us create the highly skilled jobs that will ensure a thriving local economy.
Alun Rogers, Stoke-on-Trent and Staffordshire LEP

Specialist equipment which ensures that Staffordshire University students are at the forefront of cutting-edge technologies and able to plug skills gaps in the region has been unveiled this week.

Part-funded by Stoke-on-Trent and Staffordshire Local Enterprise Partnership, the equipment is part of a ‘Digital Shed’ maker zone which will be openly accessible to students from a wide range of courses from September this year.

Inspired by Maker-spaces and ‘Fab-Labs’ the new Digital Shed, at the entrance to the Mellor building, will house a range of equipment including milling machines, 3d printers, laser cutters, a soldering station and specialist work benches and tools.

The WEF is not-for-profit organisation headquartered in Geneva, Switzerland which brings together influential leaders from all over the world to help shape global, regional, and industry agendas, and effectuate positive change.

Members, who are invited through nomination, represent businesses, academic institutions, and government bodies that are among the world’s top innovators, disruptors, and regional champions – and who help their respective economies thrive and contribute to societal prosperity.  Famous members include Sir David Attenborough, Sir Richard Branson,, and UN Secretary General Antonio Gutteres.

Final year sports journalism student Molly Hudson has been shortlisted for Football Writer of the Year by the Sports Journalists’ Association. Molly, 20, has been encouraged to work freelance during her university studies and spent last summer working on the World Cup for the Independent.

She now writes regularly for The Times and the BBC Sport website and will be covering the Women’s World Cup in France later this year.

Molly said: “I am absolutely overwhelmed to be shortlisted for such a prestigious award, alongside many of the sports journalists that I continue to learn from and admire. The Times have supported me, and believed in me to put me forward for the award, which was an honour in itself, and I could not have built the close relationship I have with them without the help of Staffordshire University, particularly Mitch Pryce and Ian Whittell and the depth of contacts they have from years of experience in the industry.”

“It can be hard to juggle working as a freelancer in such a pressured, and high-paced field, but the lecturers at Staffs have gone out of their way to ensure I can commit time to my uni work as well as my career and maybe even have a bit of free time too!”

Molly’s course leader Mitch Pryce said: “It’s an astonishing achievement for Molly to be recognised at this level. The SJA also have a Young Sports Journalist of the Year category but Molly has leapfrogged a level into the main award. She’s competing against the likes of Henry Winter and Jonathan Liew – genuine heavyweight professional journalists”

“It’s yet another example of Staffordshire sports journalists making a real impact in the industry. Last year our alumni were named Midlands Sports Journalist (Lewis Cox) and Welsh Sports Journalist of the Year (Ben James) so Molly is adding to our legacy. We are all very proud of her.”

Click here to listen back to Associate Professor Fiona Graham talk about her research project into World War One live on British Forces Radio below!

Jaspreet Singh, who graduated with a first on our BA Film, TV & Radio degree in July, has had work completed for a Radio Features module accepted for broadcast by BBC Radio Stoke as two 60 minute documentaries.

The first of which has been released looking at ‘Fandom’, the rise of film and media super-fans and collectors of pop culture memorabilia:

Click Here to read all about George Bartlett’s burgeoning career at Seven Video Productions, a graduate from our very own Experimental Film degree!