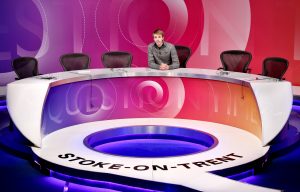 This past Thursday (23rd February) Staffordshire University held host to BBC’s Question Time in our sports centre, Stoke being in the limelight due to the by election to elect Stoke-on-Trent’s new MP, one thing that brought this seemingly normal by election in to the national spotlight was that UKIP’s new leader Paul Nuttall was a candidate. Stoke which has been a labour solid seat for many years had the potential to see it replaced by another party, due to labour electing a solid remain campaigner to run for a seat to represent a city which hugely backed the leave campaign.

Having the BBC broadcast from the University presented a wealth of opportunities for students studying here particularly the Broadcast Journalism students who were shown the ins and outs of how the broadcasting trucks operate, hands on experience in operating the on-set camera’s and how the crew prepare with sound and visual checks. The highlight for me of the pre-production experience was the chance to sit on the rehearsal of the show, where students took the role of the panelists and got the chance to work with the show’s host David Dimbleby. 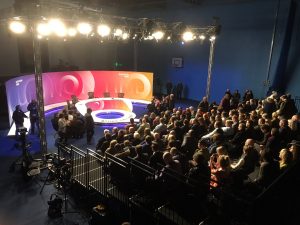 Once the rehearsal was over I got the chance to see how the show prepared for broadcast, this show was particularly special as it was being broadcast live due to the polls being open till 10pm so the show being broadcast once they were closed the panel could openly discuss the election and basically say what they liked. The audience arrived each given a card to write down a question to ask on the show the final questions to be asked would then be selected by the show’s producer. With everyone in the audience greenroom Mr Dimbleby came to speak to the audience and jokingly check the audience had all seen the show before followed by a short chat about what he expects from the audience.

Excitement grew, with the unknown of how the panel of guests would react to the questions thrown at them and to each other, the audience were seated and shuffled for the best camera angles. At this point the panel and host were seated and myself joined by other students and respected figures at the University waited for the show to go live.

The show went on air with success and was widely commended for one particular panelist, Peter Coates, who held his own against a strong panel of politicians and a journalist even a heckle or two from passionate audience members. I found the whole experience to be one I shall never forget, it just adds to the experiences I’ve had at Staffs Uni and I know that I have many more to come, being a part of this made me even more thankful I came to staffs. One thing I have learnt from this is that experiences or opportunities don’t come to you, you have to put yourself and make them happen, so if someone perhaps doesn’t ask or suggest something don’t just accept it just ask and make it happen be proactive and you will succeed.

“As for Staffordshire University as a venue, it has been very easy for us to set up here. The facilities are good and the staff have been really helpful. From my point of view, I think it would be ideal to come back again in the future.” – Peter Walker, Engineering Manager for Question time. Weeks after hosting the national Boxing championships finals Staffs successfully hosts and broadcasts BBC Question Time to the nation events are flooding in, time and time again the University is proving its potential. I’m certainly #ProudtobeStaffs

Top 5 Shows To Watch On Netflix

Spring Cleaning: A Guide to Keeping Your Halls Spick and Span