Starting university is scary. That’s a fact. It’s a huge thing to do that brings on a lot of changes; and big changes, at that! And, let’s face it, one of the scariest parts has to be the people!

Meeting new people was definitely my biggest fear when I was applying. That, and the idea of being all alone for the first time! But fear not, my friends, as Staffs is kind enough to set up an official group for you to meet your future course mates/flatmates/society-mates in, every year! As someone who utilised the crap outta this group last year, here are my top tips:-

Firstly, don’t worry about meeting the wrong sort of people. Because it’s set up by the uni, the Staffordshire University New Students group isn’t cluttered with all the fresher’s​ sales posts some of the unofficial ones are. It’s also specifically just for 2017/18 starters. So – other than staff and a few other ambassadors/digital ambassadors (like myself) – everyone in the group is starting in the 2017/18 year with you!

Secondly, go hunting! Especially if you join the group after mid-spring, the chances are there may be someone who’s already posted in the group looking for someone in the course or accommodation type you’ve applied for. There’s a search option on the desktop version of Facebook which can help you with this. Note: search different things if nothing comes up; search just ‘comic’ instead of ‘cartoon and comic arts’ in case someone’s cropped down the course title in their post, or ‘ensuite’ instead of ‘Clarice Cliff’. 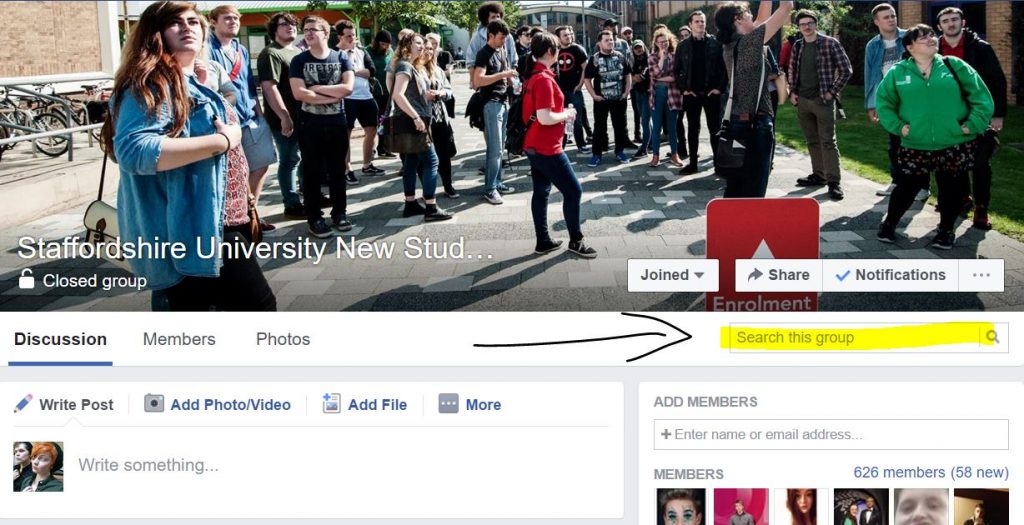 Next, if your search turns up nothing, don’t be afraid to drop a little introduction post – ‘Hi, I’m *name*. I’m studying *course* in September, and have applied for *type of* accommodation. Anyone else?’ If there are no posts for your course when you first join, but you decide not to post anything, your next coursemate to join will be in your position all over again!

And finally, don’t be shy! Most of these people will be just as scared as you! Don’t be afraid to request to join a group chat, or to comment on a post you’re interested in. It’s definitely worth it. Don’t believe me? Here’s some fun, personal experiences!

I met two of my flatmates beforehand​ in the New Students Facebook Group, after I posted my room allocation, and it made move in day so much easier! Here’s us three months later celebrating Christmas together (shush, it’s the best photo I have of us all)! 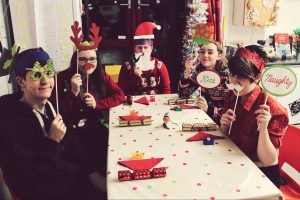 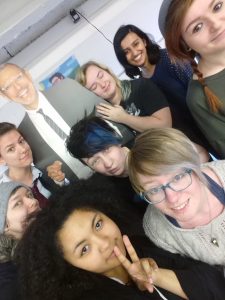 These are the people who responded to my post about starting Cartoon and Comic Arts, in summer last year. We agreed to meet up the day before classes started and hit it off just as expected. We’ve been best friends ever since. I know most of this blog has maybe felt like a hard sell on the group, but I can’t praise it enough, honestly. If it hadn’t been for the New Students group, I might not have ended up with these losers that I call my best friends.

About Maxie 27 Articles
Hi! I’m an Esports Masters student, who previously studied Cartoon and Comic Arts. So you’ll guess that I love reading comic books, going to conventions and cosplaying and my dream career would be to write for Marvel or DC comics! But what you wouldn’t guess is that my guilty pleasure is listening to cheesy 2000’s pop music. Students - Expect the unexpected!