So folks, it looks like we’re going to be having another general election in the not so distant future. Let’s talk about that…

As of writing this, the announcement that there will be a general election on the 8th June came earlier today, and of course, there is a general uproar. Whatever political party you back, most people at the moment seem to be of the same mindset… Again? Already?! That being said, please do not be deterred in getting involved. In a time where there are rising tuition costs, increases to student loan interest, and cuts to support services, the policies and changes made in government directly impact you as a student. It is crucial for you to have your voice heard by being active in the political system.

Of course I am no political expert, and I am not here to preach to you what you should believe in, and which candidate to back. At the same time, I understand your impatience or apathy for politics. Particularly when the political landscape appears to be so polarised, where you’re labeled either a racist, xenophobic, right-wing bigot, or an unrelenting, liberal, left-wing social justice warrior. Sometimes it feels like you can say something remotely to do with politics, and you are immediately attacked for your views, and hated as a person.

It can get very heated, but I always commend people who are willing to express their views, as well as be open to opposition or conflicting ideas, because of course it goes both ways. While you may feel it wrong for people to come for your beliefs, it is very easy to fall into the trap of being very defensive yourself, and attack others for opposing ideologies. At the end of the day, we are all people trying to do the best we can to live, and sometimes it is easy to forget that, especially if we’re arguing with people over social media. In the next month or so, when an opportunity arises to have a discussion with someone who doesn’t support the same party/candidate as you, maybe take it and see where it goes. You may learn something about why that person is voting the other side, that you didn’t realise before, or you may even convince the other person why supporting your party is the better option for them.

When the Brexit campaigning was in full swing, I remember how strongly people felt about either side they were supporting, and the country ended up being divided, almost 50:50. We all remember how crazy everything got, and although the result did not reflect my own views and hopes for the country, I am still glad that I voted and officially stood for what I believed in. See me in need of a haircut, taking a selfie to try and encourage others to go vote on the day. 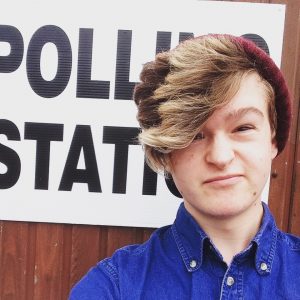 At this point, if you are still reading this and thinking about getting involved, first things first make sure you are registered. As a student you can register at both your home and term time address, so that no matter where you are on election day, you can still send in a vote. If you are unsure if you are already registered at uni, you can always send an email to elections@stoke.gov.uk, and enquire if you are on the register in time to vote on 8th June. On the day, there is usually a polling station somewhere on campus, so if you are a first year in halls, you don’t even need to go anywhere!

Thanks for reading, and before I end this I’d like to give a quick shout out to Mel Ramsay, former Student Union President who, during my first year, organised a political-themed fun fair, sparking my enthusiasm for both being politically aware, and getting others to be involved. Wishing you all the best Mel!

5 Things to do in Stoke-On-Trent – Burslem

What to do in Staffordshire this November