In a recent paper published in Political Psychology by myself, Karen Douglas and Robbie Sutton from the University of Kent, we found that conspiracy theories might be a way that people can defend their everyday lifestyle when society is under threat. In other words, conspiracy theories may sometimes bolster rather than undermine support for the social status quo when its legitimacy is threatened.

Conspiracy theories are associated with almost every significant social and political event, such as the suggested theory that the U.S. government orchestrated the 9/11 attacks.  A similar thread throughout conspiracy narratives is that they point accusing fingers at authority (such as the government).  Conspiracy theories single out a small group of perceived wrongdoers who are not representative of society more generally but instead are working against us.  Believing in conspiracy theories may, therefore, give people the opportunity to blame the negative actions on these wrongdoers, thus then bolstering support for the social system in general; blaming a few bad apples to save a threatened barrel. 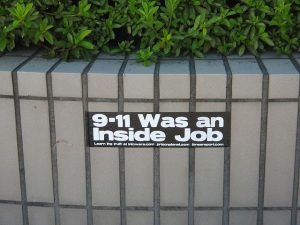 This argument is in line with system justification theory which proposes that we all have a motivation to hold positive views about the society that we live in.  When our society is threatened, however, we seek to defend or bolster the status quo; for example, people may use stereotypes – which are mental shortcuts about different groups of people – to justify differences between people to maintain the status quo that we are used to.  In our new paper, we argue that belief in conspiracy theories may join the ranks of these system-justification processes.

This research provides a new understanding of the role that conspiracy theories may place in our society.  To directly quote the end of the paper: “The present results suggest that by pointing fingers at individuals – even groups of individuals charged with operating the system – conspiracy theories may exonerate the system, just as blaming a driver for a car crash shifts blame from the car.”

The Staffordshire Centre for Psychological Research is home to research activity in the Psychology Department at Staffordshire Centre. The Centre is home to a number of research-active psychologists who are engaged in research across a wide range of psychological subdisciplines. The Centre has two overarching research streams, Health and Behaviour Change, and Applied Perception and Cognition.