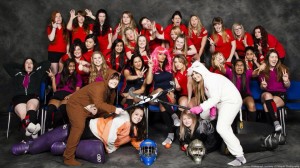 Most people you speak to when you first start university will recommend that you join a club or society to  expand your friendship groups.

I can honestly say that joining the Women’s Hockey team at Staffs was one of the best decisions I’ve made in my time here. It has given me a chance to interact with older students, who gave advice on part time jobs, where to go out and where to go to find a house for second year. Housing is something that I will come back to in a later blog.

The advice I got from those who were already on the team was and still is invaluable to me. This year being on the committee for the club and also being the Communications Officer has made me realise how much went on behind the scenes in first year and my respect for those in charge last year has risen tremendously. Being on the committee has taken up a lot of my time this year but its not something I’d ever regret. It’s taught me a lot more diplomacy and responsibility than I thought it would.

But moving all the politics of any club aside, I think a lot of people who join clubs and societies don’t expect to make friendships for life. I can say that the people who I play hockey with I think of as my close friends,and that together we are a massive family, including those who have graduated.

Joining a sports club in particular can help to keep your fitness levels up as well as socialising. BUC’s games happen every Wednesday and I think are a great way to get some exercise in without having to drag yourself to the gym or go for a run, which is an eternal struggle in my life!

The final reason that everyone who goes to uni should consider joining a club or society is this: VARSITY.

Varsity is where we play against our local rival university Keele in all the sports which we both have teams. More and more societies are also getting involved in this, the most recent I’m aware of being the Gaming Society. It’s healthy competition and it helps everyone at the university feel as though they are moving towards a goal together, which can’t be a bad thing!

To end this blog my advice to all freshers and second and third years who want to be a part of something they love is to go to the clubs and societies fair at the beginning of the year! Most clubs and societies will have a stand to tell you more about them, and you’ll get to meet some or the people which you may become friends with. Along with this check out the union website as that has links and contact details for all the clubs and societies run by Staffordshire university and a lot of other universities do too.

Top Films to Watch This Christmas

Spring Cleaning: A Guide to Keeping Your Halls Spick and Span