Imagine going to work on a Monday morning only to be told that you couldn’t go home for a month, had to live within the confines of a 70 foot office in the middle of the summer without air con, and you couldn’t leave at any point whilst remaining on stand by for 24 hours a day. Throw in the additional challenge of crossing the World’s 2nd largest ocean with 22 other people, and no tech support. 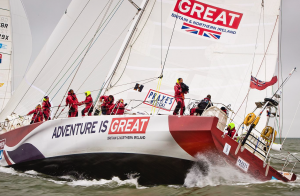 Not everyone’s cup of tea, but it wouldn’t be a challenge if anyone could do it.

It’s always been an ambition of mine to cross the Atlantic, and I realise at 32 it’s a privilege, especially as crew members in their 60’s tell me it’s been their dream since they were teens.

Forget the send off in London at Tower Bridge, or skirting around France into the Bay of Biscay. Nothing gets interesting until it gets tough, and this race was full of character building moments.

Sir Robin Knox Johnson (The founder of the Clipper race and the first man to circumnavigate the Globe non-stop and single-handedly) said in the race briefing in London that at times the closest human beings would be over 100 kilometres above us in outer space, and at times it certainly felt that way.

Working in this environment is exhausting because I’m doing my regular job but in an extreme environment which provides a good reference point for me to build on. It also provided the context that any technical issues I had were to be solved independently but hopefully with the moral support of the crew.  You also have the additional challenge of being accepted into the crew as a non-racing participant.

Our first challenge wasn’t technical or about acceptance however, as 5 days into the race Ichorcoal crewmember Andrew Ashman, a Paramedic from Kent was killed just off the Portuguese coast. This resulted in an instant communications blackout across the fleet.

The news was significant because he is one of you, and you suddenly view the boat very differently. Like an untamed beast that bites you from time to time, fuelled by an ocean just waiting to catch you out.

We felt the emotion and observed a 1-minute silence in respect. To the pride of the fleet, Ichorcoal took the decision to continue the race and do it for Andy. This loss was a first for the Clipper Race, and it’ll be emotional when they make it into Rio and everyone receives them.

The oceans are dangerous places, and injury proved to be one of the major themes of leg one, and our boat was no different. During a knock down during a sudden storm into the doldrums two weeks in, we broached over to 90 degrees. This is when the heading suddenly changes towards to the wind due to wind/sail interactions, for which the rudder cannot compensate.

The only way I could describe the experience was like being placed in a snow globe and shaken violently, and although we didn’t record it and it isn’t uncommon – it was quite similar to this experienced by Derry in 2013 (https://www.youtube.com/watch?v=XyGN-O4arkA)

The spinnaker sail was punched into the water repeatedly by the wind gods, and I suffered a small laceration to right thigh and was kindly stitched up by the skipper and crew. Looking at those below me was like looking at faces from a horror movie, drenched in my watered down blood.

That done and dusted, and surviving on charts owing to the failure of the Navigation and weather systems, we pressed on. Sleeping on the boat can be pretty unpleasant and hot, frequently requiring a trip to the deck to get some air and then try and get back to sleep. Concentration is sometimes hard to achieve and you will go through a period when you just don’t want to be there.

I also slept next to the Navigation station, so my sleep was so light and tactical conversation between skipper and crew alerted me immediately to any developments, so it felt as though I was continuously awake night after night.

As I said, Ocean racing is dangerous and all our Clipper training was about to be put in practice. On the 17th September, John Charles headed up the mast a little after 4 in the afternoon. Around 80 foot from the deck and nearing the tip of the mast he lost control, violently slamming into the mast and spreaders.

He immediately shouted down he’d broken his wrist, and we could see blood on his white top. The violence of it shook the crew, but everyone responded with complete professionalism to the situation. No panic, just cool and calm, especially our Skipper who went up to bring him down.

I immediately auto piloted into filming mode: Shoot from distance, give them room to work, and document the rescue. Show respect, and allow people to help their buddy.

John was brought down 20 minutes after the incident, and was immediately attended to on the deck by the crew. 17 Stiches for a deep laceration, and a double fracture of the wrist, which the crew had to reset. Advice was plentiful from the onshore medical team and the skipper acted superbly.

We wouldn’t need to divert but John’s leg 2 to Cape Town is almost certainly over, and he is currently undergoing surgery to realign his wrist in Rio. Needless to say we all wish him the best possible recovery.

I could write double this amount, but I’m going to end with ‘lessons to be learned’. The Ocean is a brutally unforgiving place and any mistakes you make are magnified, usually owing to fatigue, inexperience, or just because she wants to toy with you.

Taking those lessons into the next leg is paramount to success and learning quickly from mistakes, as well as from your successes. Leg 1 provided a more than adequate training ground, and this is a steep learning curve.

We are happy with the show though. GB finished third which saw them pip Derry to the last place on the podium by just one nautical mile, astonishing considering we started metres apart 5 and a half thousand miles earlier. This sparked wild celebrations on GB and rightly so, but this is a long game, both for the crews and the television series so who knows what challenges wait as we head out on the 7th of October to Cape Town.

I’d also like to thank the crew for accepting me into the group, their continuing support, and wish them all the best for the remainder of the race. Oh, and to Tom the Cameraman for attempitng to hand me some spare underpants from the chase boat at race start, in exchange for News footage for ITN.

Braving the weather on TV shoot

After 3 years of hard work, this was my Graduation ?