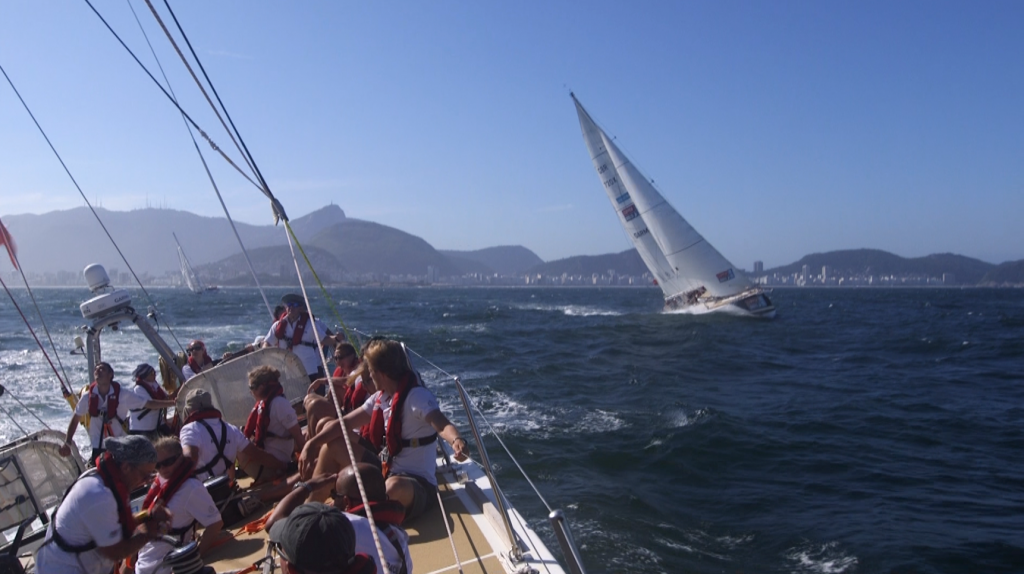 When I took the job on the ClipperRace, I always knew it would be difficult. You need look no further than the fact people always drop out.

These range from Skippers to Crew, and various professionals who work across the race in numerous positions. Everyday brings a new challenge, and you have to discover new types resilience often unbeknown to you. I’ve become very realistic about my ambitions to complete a circumnavigation of the globe filing this race, because anything could put pay to that at anytime. One step at a time is a sensible way to approach it all…

The start of leg 2 from Rio to Cape Town was spectacular, and we encountered winds of force 8 sailing out of Brazil. This made for some beautiful helicopter footage (https://www.youtube.com/watch?v=loMKc1P7NGQ) but this should never disguise the hardship and the inevitable seasickness which follows…

I’d joined the South African boat Ichorcoal, whom had a reputation as a real ‘family boat’, and this proved to be the case. Led by Skipper Darren Ladd, his philosophy is very much to empower the crew by allowing them to make a large proportion of the decisions on deck, and to entrust them with sailing the boat.

Of course Darren is the skipper and runs the show, but by comparison to the first boat I’d joined from London to Rio, this represented a more relaxed and informal approach to racing.

I’ve been a camera Operator ever since I left University back in 2005, slowly adding strings to my bow as a Producer, Director, and Editor. After years of working, it’s true to say that many professionals become hardwired to a certain way of working, and evolving your state of mind often takes time, or a circumstance where change must occur. This is a typical ‘make or break’ scenario.

I’ve worked in many environments which have required me to either work quickly, or to take my time and pay more attention to detail. Other situations can be more dangerous, so just getting pictures is good enough. Sometimes you need to be subtle, other times a little more forceful to get results, and this is very delicate balance.

Before I left Rio, someone told me that ‘sometimes good is good enough’, but I’ve never subscribed to that. Half way into leg 2 I began to understand that aiming high is great, but perfection is seldom achieved when you aren’t dealing with your normal rules of engagement…

The sea state changed dramatically (https://www.youtube.com/watch?v=00FM7VkAexk) and it was clear that Leg 1 to Rio had been Champagne sailing most of the way. I wanted to shoot interviews on deck but couldn’t how I’d become accustom. I nolonger could control the sound, nor the camera as I’m used to doing, which creates a challenge in itself. How can you produce your best if you can’t operate at even 70% of your ability?

The lens steams up, tech stops working, salt corrodes your equipment, you fall over, you break kit, and you have to remain focussed on the story whilst interviewing people looking at an eye line which doesn’t exist because I’m behind the camera. Everyday is about problem solving, and sometimes you have to accept that you can’t achieve 100% of your objectives.

But this has been done before right? So why it is so difficult?

It’s difficult because you’re hardwired. And so begins the process of rewriting the basic principles of how you’ve always operated. There was a time I was woken at 0400 to film a sun rise, and it took 45 minutes to get dressed, load the camera, and walk 15 metres onto deck.

There was another time it took me over an hour to shoot an interview owning to the sea state and subsequent noise in the galley and sail locker. I started using the Garmin VIRB and ceased using my primary camera on deck. This wasn’t because I didn’t have a wet kit, but when the boat is heeled over at 45 degrees, operating heavier kit becomes a distraction and you can often get sucked into a false reality when looking through a larger viewfinder.

So basically, adapt or give up and go home. I’d be lying if I hadn’t thought about quitting at some point… but the ability to find that little bit ‘extra’ is often the little difference between ‘ordinary’, and ‘extraordinary’. This applies to every on the Yacht.

There is only one of me on the boat, and I don’t have that choice of quitting, and I can’t even sanction that decision inmy own mind. You either choose not to shoot, or to shoot. It’s that simple. Having a very supportive crew makes the World of difference, because most people on the boat will at some point have a pretty dour day and can recognise when you’ve hit the wall.

Arriving in Cape Town is pretty spectacular, with the sun rising behind Table Mountain. We’d arrived into South Africa in just over two weeks, but after a period of rapid adaptation I genuinely was ready for more, owing to a better understanding of the conditions.

I post pictures on Facebook and often think I should only post shi**y pictures, as the splendour of shooting shark diving and hiking features on location looks too enjoyable. I wonder if that would change people’s perceptions of my experience. That might be a better approach in future as to show what crossing an ocean is really like. 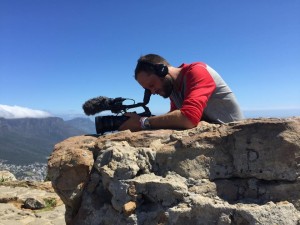 Next up, It’s the Southern Ocean. I’m both excited and apprehensive. Most don’t fully understand what we’re getting ourselves into, but it will likely prove to be the hardest 4 weeks of our lives so far. It could be pretty much hell, but as Churchill once said, “If you’re going through hell, keep going”

Here is a preview video from the previous edition of the race leaving Cape Town for Western Australia. https://www.youtube.com/watch?v=861lbJmVeSg

The sea state is going to be almost unimaginable, and pretty scary. As they say, anyone who doesn’t feat the ocean is either a fool or a liar, and I’d go along with that.

I’m joining team Garmin for leg 3 and very optimistic there is a great story to be told. Everything I know about the team tells me they will be competitive, but with these oceans you just never know…

How I work as part of the Clipper family

Race to the start