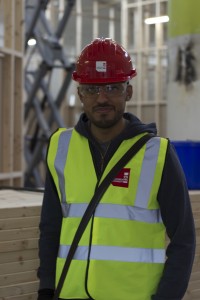 ‘’If a building becomes architecture, then it is art!’’- Arne Jacobsen

Those are the exact words that came to mind when I was asked to come and look around the building area for the brand new upcoming university buildings that will be brought to life in September.

You see, for many new students who joined the university last September (like myself) would have noticed the extensive build work that seemed to have propped up out of nowhere. Now, what would you do… if I told you that what’s in store for everyone in September 2016, no matter if you are a current or new student and let’s face it lecturers too… will be something wonderful and rather futuristic?

Now, I can assure you that there isn’t a knife pressed against my back, forcing me to type all this (trust me… I’m more concerned of how they would find a way to my house), I speak nothing but the truth. On Tuesday (9th February 2016) I was equipped with a hard hat, a yellow hi-vis vest, protective glasses… well… just think of an Asian ‘Bob the Builder’ and you’ve got the right idea.

I met up with Kris, Judy and Peter (The Project Manager) at Flaxman Foyer, and led to the build area where I came across builders, hard at work in creating new facilities for students.

I was shown upstairs to the soon to be screen capturing studio for games designers and film/animation students (which as a radio student I felt rather envious… However I work with sound, so that’ll be my excuse to test out these studios for myself in September). I was shown around to the new computer rooms which will be designed especially for news games designer students, fully installed with CAT 6 ethernet cables (which in laymans terms means… a cable that will deliver internet at a incredible speed) and much more. But before you get put off the idea that the building work will be only for game designers… there is more. 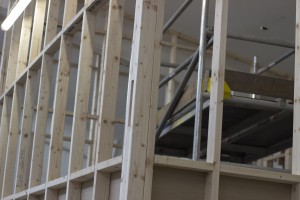 I was shown the brand new music studios, that will be completely kitted out with the latest soundproof and lighting, perfect for upcoming music students… or shall I say the artists of tomorrow. The one extensive building work that left me speechless is, what was store for me when I stepped outside to the Cadman courtyard. In front of me was what I was told, was going to be ‘Staffordshire Universities very own Pinewood Studios’. Now, TV and Film students (old and new)… let me tell you… you are going to have so much fun in September. Imagine being able to shoot your productions whether TV or film that mirrored industry standards. The environment itself is fantastic and I really cannot wait for all of you to see it in September 2016.

There is a surprise in store for everyone here at the Stoke campus, not only for the students and staff but the public themselves and it’s that very reason that makes me proud to be a student here at Staffordshire University. There is so much I saw on the tour and there is so much I want to put into words but for now… I shall leave you waiting. I want YOU to explore it for yourself when the time comes.

Trust me, it’s going to be…

Mellor development…looking to the future!

My New Campus – Centre of Excellence in Stafford!