Now, I have a friend who has been a Ghostbusters fan all of her life and while my memories of Ghostbusters are scarce, having only remembered that one ‘Decapitated Heads in the Train Tunnel’ scene which I remember leaving me scarred as a child, I finally decided to on a busy university week in March to give Ghostbusters another go.

It’s June now and within those months I have watched both of the original Ghostbusters films alongside the two animated animated spin-off series ‘The Real Ghostbusters’ and ‘The Extreme Ghostbusters’, and not of course the fantastic 2009 ‘Ghostbusters: The Video Game’. So, yeah… you can say I’m a fan.

Now, there has been so much backlash and hatred for the new Ghostbusters reboot over the last few months but today I had the opportunity to see the new GB film. Now, despite the mixed opinions that many fans and movie enthusiasts had over the trailer, I really enjoyed Paul Feig’s take on the Ghostbusters universe. The characters themselves are well developed and the story itself has elements of surprise. Personally for me, the CGI neon ghosts were the only downside for me as I do believe they could have got rid of the neon glow as it was rather unappealing for the eyes to see in 3D. 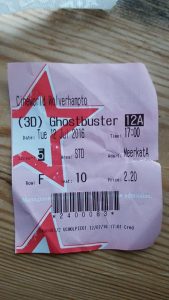 The film is filled with references and easter eggs which left me grinning like a fool. Don’t get me started on the cameos, they were cleverly crafted within the film and not just thrown in for the sake of it. If you are going to watch the film then PLEASE do STAY for the very end as the film has a POST-CREDITS SCENE!

Overall, it’s a good movie on it’s own and it does capture the Ghostbusters feel while bringing it’s own flavor to the universe.

If I had to sum up the film in one line it would be ‘Ghostbusters… but not as you know it.’.

Deal with it: Be the producer in your life

Top Films to Watch This Christmas