Over the last weekend, students from Level 6 Football Culture group, in Sports Development and Coaching, and Sports Therapy students jetted off to Barcelona. Student Shannon, shares her experience of the trip. 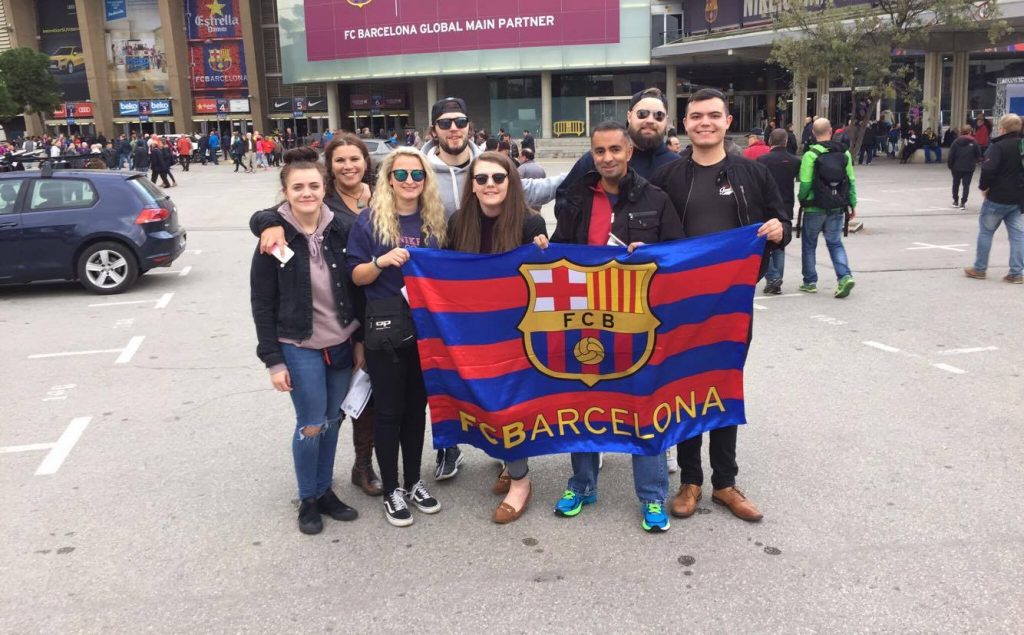 On Saturday we arrived in Barcelona and headed straight to Camp Nou where we watched FC Barcelona take on Malaga in their league fixture in the La Liga. The day after we completed a full stadium tour of Camp Nou, this involved a trip through the museum visiting all the trophies that Barcelona have won over the years and even visited the pitch side to see where all the magic happens!

On Monday morning we toured the Espanyol stadium to witness the difference between the two main football clubs in Catalonia on a large scale. Camp Nou’s current capacity is 98,800 whereas the RCD Espanyol Stadium capacity is 40,500 which is a huge difference when it comes to a sport where without fans and spectators the sport would be nothing.

Monday afternoon we were given exclusive behind the scenes access to the Barcelona FC training complex where the top teams from Barcelona practice including Football Club Barcelona, Basketball and Handball, this is also where the future of Barcelona’s sports teams train in the youth academies. We were also given the opportunity to meet the men behind the famous Barcelona footballing philosophy, Juan Vila and Paco Seirullo who are involved in the methodology department for the biggest football club in the world. This was an unbelievable experience to gain insight into what happens behind closed doors for Barcelona FC.

Before we headed back to England we visited the University of Ramon Lull where we engaged with a group of Spanish and two of our students (Joshua Morton and Recce Roberts) gave a short presentation into what life is like to be a British student and particularly at Staffordshire University. We then went off into groups to discuss what makes Staffs stand out from any other university in the country, we also learned what it’s like to be a student in Spain. The University of Ramon Lull were very welcoming to us and the trip is certain to be hosted again next year.

Discover more about studying Sport and Exercise at Staffordshire University

Top 5 Shows To Watch On Netflix