A couple of months ago, I decided I needed to take better care of myself. Eating healthily is a chore, most of the time, and there’s a stigma around student diets for a reason. If I find something that’s easy, works, and is good for you, I should share it, right? Right.

I tried River Cottage’s recipe for cheese and walnut stuffed butternut squash, and when it said it was supposed to serve four people they really weren’t kidding. So, using a smaller squash and smaller measurements, and I’ve adapted the recipe to be student friendly – and I’ve priced everything up for you, too! It’s vegetarian, but I’ll include some tips for anyone who wants a meaty or vegan variation.

Now, looking at the grand total the first time you buy this stuff it’s just over a tenner. But, because most of it is stuff you might already have in, or things you’re going to keep using, it’ll work out cheaper. For context, I made this last night, and all I had to buy this time was the squash and cheese — So, two meals for £2.24. That’s a bit of a bargain.

Note: I got all but one of my ingredients from Lidl, and the closest alternative to campus is Aldi, whose prices are comparable, if not cheaper (usually!). 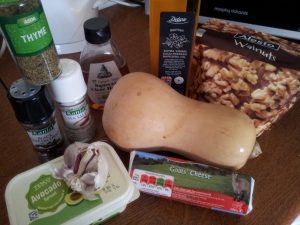 This is lengthways, don’t do it the other way

Walnuts toasting in a . . . frying pan

What you’re gonna do:

And that’s it! Eat it! Eat the whole darn thing. You’ll get two big servings out of this, or four small ones, depending on the size of your squash. It’s nice with a little salad, but it’s filling, good for you, and when you’ve done it once it’s cheap to do again. You know the best bit? Each stuffed squash half is only 427 calories. A Big Mac is 563.

Plus, you get to impress all your housemates. That’s pretty cool too.