In the October of every year, the freshers of Media (Film) Production, Experimental Film Production, and Advertising, Film & Music Video Production at Staffs go on a 4 day trip to make their very first film. For my year, this trip was to a town called Ambleside in the Lake District. Here, in our film crews, we had to shoot a short non-fiction film. My crew produced a film called ‘Nok Ard’, which was about the work and life of a local man we met named Norman.

But what happens after the “that’s a wrap” and the weeks spent in the editing room?

Well, MFP, EFP, and AFMVP definitely know how to celebrate their hard work. Towards the end of our first semester, on the 16th November 2016, we all got together in the campus’ very own film theatre and screened our work to our peers, lecturers, friends, family, and the strangers of the public. This is definitely a very scary time for us – but it’s so worth it. This is the first time that we, as film students, get to hear the audience laugh at the funny moments we’ve carefully crafted, or gasp at the twists and turns we’ve placed into a narrative. It’s at the film screening that our work comes to life and we collectively realise that this is why we’re all here.

And while the screening alone is enough to make you feel accomplished as a first year, after the screening is over, it’s time for awards! My crew was lucky enough to win the award for best sound design, so I can say first hand that this evening really does give you the confidence and drive to go on to make bigger, better things as the semesters roll on. 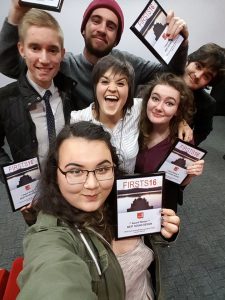 The media courses have a formal screening for all of their films, which is one of the defining features of our courses that makes us feel like ~proper distinguished film makers~ from the get go.

About Victoria Charlesworth 3 Articles
Hello! I'm Vicky and I'm a first year Media (Film) Production student. Outside of lectures I like to spend as much time as I can surrounded by people, be it in the library, my flat, or Ember Lounge (especially on karaoke Tuesdays!) I'm essentially a crazy dog lady in the making with a big love for musicals - though my not-so-guilty pleasure when it comes to music is Christmas songs.

5 opportunities university has given me…

Tips on Writing the CV That Gets THE Job!