Ahead of the return of the Big Bang Fair to Staffordshire University in 2019, here is a brief review of the Department of Psychology’s presence at the 2018 fair:

The ‘Virtual Reality in Psychology’ stand allowed visitors to experience dinosaurs in VR, and learn about how we can use virtual environments in psychology. This was a very popular stand, with many people trying out the dinosaur experience! Guests also had the chance to test their memory, and learnt how to improve it through techniques such as the Method of Loci and mnemonics on our Memory Test stand.

The event was a great success, with a huge number of visitors taking part and enjoying the activities. Staffordshire University has been confirmed as the home for the 2019 event, which will take place on Tuesday 18th June 2019. Come along to find out about all things STEM, including Psychology activities. Book your free visit here.

On the ‘Detecting Stress Responses’ stand, guests were connected to a BioPac, and had their Galvanic Skin Response tested whilst doing moderately stressful activities. This measures the level of sweat on the fingertips as an indicator of stress, so the aim was to attempt to keep your stress levels down.

One student advocate who helped to run this stand said

“I was particularly happy to see so many young girls expressing enthusiasm and engagement with some of the scientific principles that we were demonstrating to them on the Detecting Stress Responses stand.  Great to see that STEM engagement with girls is improving.”

The Department of Psychology at Staffordshire University offers a range of undergraduate and postgraduate degrees in Psychology at the University’s £30 million Science Centre in Stoke-on-Trent. The department is home to the Staffordshire Centre for Psychological Research, a large and active group of psychologists, PhD students and researchers conducting work into a variety of psychological disciplines and topic areas.

On 21st May, myself and Dr Alexa Guy visited Biddulph High School to deliver some psychology outreach sessions to a group of Year 12 psychology students, in order to discuss the benefits of studying a psychology degree, and to showcase some of the research that happens here at Staffordshire University. 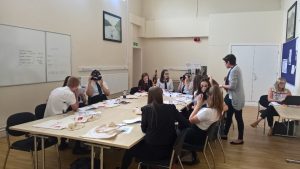 After starting with a talk on ‘Why Study Psychology?’ and ‘What Do Psychologists Do?’ the students then learnt about conspiracy theories, discussing some well-known conspiracy theories and what they have in common, before looking at why people might believe them, and the impact that they can have on behaviour. 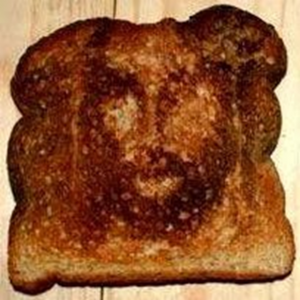 The ‘Jesus in toast’ illusion

This was followed by Jesus in Toast (and other face oddities), a session asking why people are so good at seeing faces in random patterns such as clouds, or even the markings on a piece of toast! We looked at so-called ‘super recognisers’ who are extremely good at identifying faces, and Prosopagnosia – a disorder leading to the inability to recognise faces, sometimes even your own face! They then had a go at creating their own versions of the Thatcher Effect, which has recently been updated to the ‘Adele Illusion’ demonstrating how we often fail to attend to facial features when presented with an inverted face. 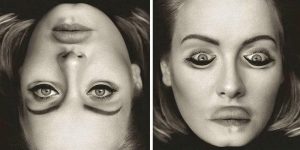 The ‘Adele Illusion’ based on the famous ‘Thatcher Illusion’ – this is the same picture but shown in two orientations (look at Adele’s eyes and mouth in both pictures!)

Finally, the students learnt about how Virtual Reality tricks our brain into believing that we are in a different world. After looking through some visual illusions and examples of how we can trick our brains, they saw how VR takes advantage of certain processes. To finish, they were able to try on a VR headset and have a go at diffusing a bomb in VR. 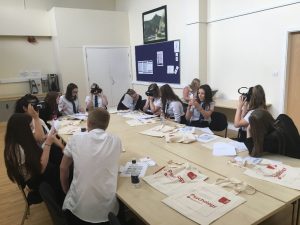 Throughout the sessions, the students engaged in the activities, enjoying making their own version of the Thatcher Effect, testing their ability to recognise faces, trying to see pictures in patterns, and diffusing the virtual reality bomb. We are hoping that this will be followed up by a class trip to the university, watch out for future blogs!

The Department of Psychology at Staffordshire University offers a range of undergraduate and postgraduate degrees in Psychology at the University’s £30 million Science Centre in Stoke-on-Trent.