The Centre of Archaeology was commissioned in May 2016 by Uttoxeter Museum Trust, to undertake an evaluation to the rear of Redfern’s Cottage (NGR SK 409036 333404), in advance of the refurbishment of Redfern’s Cottage and the construction of a new extension to the rear of the property. Seven test pits were excavated in May 2016 by Capstone Consulting Engineers Ltd and were observed and recorded under watching brief conditions. Later in July 2016, three evaluation trenches were completed as part of a community excavation. 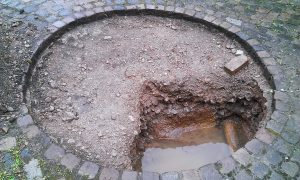 The evaluation found evidence contemporary with and predating the 17th century Redfern’s Cottage. Part of a ditch (or large pit) was identified in one of the trenches. This feature was probably associated with the known 13th-century development of Uttoxeter. The lowest fills of this ditch contained pottery dating to the 13th century. Through comparing the size and form of the feature with other examples in archaeological contexts it is very likely that this was a ditch which originated in the medieval period (13th – 15th century). It is of the type used frequently for a boundary, or defensive function. Its size (which was at least 2m in depth and inferred to be at least 4m in width) suggests this was more likely to be the ditch associated with the town or local manor house.
Therefore, this may be related to the medieval manor house, which is known to have existed on the southern side of Carter Street. 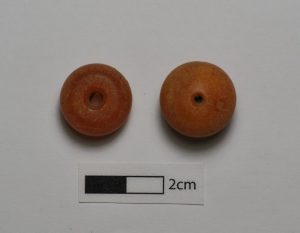 Two amber beads thought to have originated from a medieval rosary, metalworking waste and 13th-century pottery was recovered from within the fills of this feature. The feature appeared to have gradually silted up throughout the succeeding years, ultimately becoming abandoned and filled in during a period of known development of this area of Uttoxeter in the late 16th – early 17th century. Ceramics from this period suggest the ditch was backfilled at a period contemporary with the construction of the house around 1628. Fragmentary 19th-century foundations were also exposed which were probably associated with the development of the property in the later period. 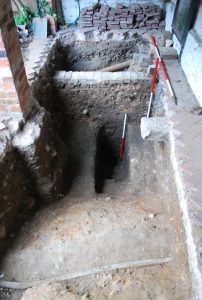 The other test pits and trenches were devoid of any archaeological evidence. The site underwent extensive redevelopment in the late 1980s. This meant that any buried garden layers which may have survived were removed and replaced by road-stone and gravels before being sealed by a flooring of brick pavers and granite setts.

The survival of the medieval feature is unusual for Uttoxeter, which has seen very little archaeological work in recent years. Remains from Uttoxeter was known to have been granted a market charter in 1251 by Henry III, this would have provided Uttoxeter with the opportunity to develop and increase in size, ultimately becoming the third biggest town in Staffordshire by the 17th century. It is likely that plots of land were laid out around the town in the 13th century as a result of this charter.