The Centre of Archaeology actively engages in projects within the local community in Staffordshire and surrounding areas. Some of the most recent projects we have worked on are detailed below. 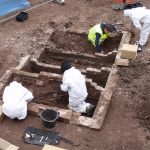 The Centre of Archaeology was commissioned in January 2015 by the St Giles Community Heritage Project, to undertake archaeological investigations in advance of the redevelopment of the church graveyard. The investigation formed part of a Heritage Lottery Funded (HLF) project at the parish Church of St Giles, Newcastle-under-Lyme, ST5 1QS.

The Centre of Archaeology was commissioned in May 2016 by Uttoxeter Museum Trust, to undertake an evaluation to the rear of Redfern’s Cottage, Uttoxeter, in advance of the refurbishment of Redfern’s Cottage and the construction of a new extension to the rear of the property. Seven test pits were had been previously excavated in May 2016 and were observed and recorded under watching brief conditions. Later in July 2016 three evaluation trenches were completed as part of a community excavation.