Archaeological investigations at the Treblinka extermination and labour camps

Since completing her PhD into Holocaust Archaeology, Professor Caroline Sturdy Colls, from Staffordshire University’s Centre of Archaeology, continues to develop interdisciplinary approaches to investigate Holocaust landscapes. She has also pioneered the use of a non-invasive methodology that allows the scientific, ethical and religious aspects associated with her studies to be upheld.

Over the last six years, Professor Sturdy Colls has worked to create a forensically accurate picture of Treblinka, one of Hitler’s most lethal extermination camps. In order to achieve this goal, she first had to secure the trust of the Museum authorities at Treblinka. In doing so, she became the very first archaeologist to work on the site since investigations were last carried out in the 1940s. 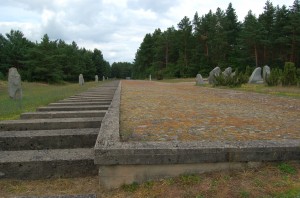 Described as the most ‘perfected’ of the Operation Reinhard death camps, Treblinka in Poland became the massacre site of over 800,000 European Jews, Poles, gypsies and political prisoners during the Holocaust. Located 108km from Warsaw, in the north-east portion of the General Government, this remote, previously unassuming area of forest adjacent to the River Bug housed an extermination centre (Treblinka II), comprising a complex of gas chambers, barracks, mass graves and, later, cremation pyres. At its peak, Treblinka II was capable of ‘processing’ between 10-12,000 people each day (Wiernik 1944).

A machinery to kill in large numbers

Constructed in 1942, it was argued at Nuremberg that ‘the erection of this camp was closely connected with German plans aimed at a complete destruction of the Jewish population in Poland – an objective which necessitated the creation of a machinery by means of which the Polish Jews could be killed in large numbers’ (IMTN 1947(3):567-568).

Additionally, the existence of a forced labour camp at the site (Treblinka I), which was operational from 1940 until almost a year after Treblinka II had closed, facilitated the implementation of the Nazi ‘death through work’ policy for thousands more so-called enemies of the Reich (Muzeum Walki i Męczeństwa w Treblince 2011). 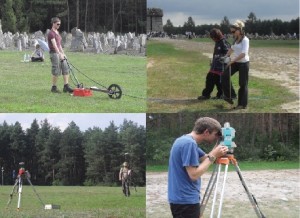 However, despite Treblinka’s significance in the implementation of the Final Solution, Operation Reinhard and the history of the Holocaust as a whole, knowledge of the site’s former function has faded from general public consciousness. Few attempts were made after the war to assess the physical evidence relating to the camps and it has long been argued that the Nazis successfully destroyed all traces of the extermination camp when they abandoned it in 1943.

The limited information at the site concerning its layout is indicative of how little is understood about its extent, whilst the somewhat abstract symbolic memorial alludes little to its former function. The history of Treblinka I, the penal labour camp site, has often been overlooked given the extent of the extermination that occurred further north. On the basis that it was deemed impossible that the landscape of Treblinka had been sterilized of all traces of the Nazi’s actions, an on-going programme of archaeological research was instigated in order to identify, record and interpret surviving physical evidence.

Through the application of a variety of interdisciplinary methods, we have sought to reveal new insights into the nature and extent of the camps. The methodology used to record the physical remains includes desk-based research, site identification and recording, as well as detailed investigation involving GPS surveys, topographical mapping, non-intrusive geophysical surveys (using ground penetrating radar) and other techniques.

The research at Treblinka has revealed ground breaking results that offer new insights into the nature of Nazi extermination. 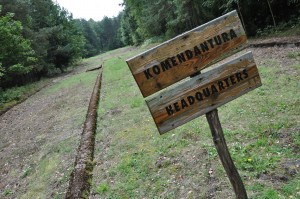 The Centre of Archaeology is also presently undertaking an ambitious project to re-present Treblinka using novel and cutting-edge interdisciplinary techniques.

In 2015, a new exhibition “Finding Treblinka:An Exhibition of Forensic Archaeological Research” opened at the site.

The Centre of Archaeology is also developing new digital heritage tools to open up access to information about Treblinka to a wider audience. Please click the picture for further details.

Further work at Treblinka is being carried out as part of the iC-ACCESS – Accessing Campscapes project. More information regarding this work can be found on the project website.

Many of the findings from our research were presented in Channel 5’s ‘Treblinka: Inside Hitlers Secret Death Camp’ programme on 27 November 2013 and in the Smithsonian Channel’s ‘Treblinka: Hitler’s Killing Machine’ on 29 March 2014.

Some initial results have already been published and more information can be found here.