Whilst the atrocities of the Holocaust are well known, even to this day the true scale of the brutal genocide carried out by the Nazi regime remains largely undiscovered.

Dedicated to the investigation of Holocaust landscapes and the creation of a specialist discipline of Holocaust Archaeology, Professor Caroline Sturdy Colls, of Staffordshire University’s Centre of Archaeology, is renowned globally for her work into Nazi genocide.

As the first archaeologist to be permitted to work on the site of Treblinka, one of Hitler’s most lethal extermination camps, located just outside Warsaw, Poland, Professor Sturdy Colls developed a non-invasive, interdisciplinary methodology that is totally respectful of Jewish Burial Law and is helping locate previously undiscovered mass graves.

In addition to her work at the Treblinka extermination camp, Professor Sturdy Colls’ research has taken her to Staro Sajmište, a concentration camp in Serbia. She has also carried out forensic investigations at various Nazi occupation sites on the island of Alderney. Her work at Treblinka first received national media attention when it featured on a Radio 4 documentary entitled ‘The Hidden Graves of the Holocaust.’

For a Channel 5 programme called ‘Treblinka: Inside Hitler’s Secret Death Camp’, screened on 27 November 2013, Professor Sturdy Colls delivers the first definitive description of what was known as Treblinka II, a location that the Nazis claimed was merely a railway transit camp. She also examines the often forgotten labour camp at Treblinka and uncovers the locations of previously unknown mass graves. Bringing together the findings of painstaking investigations completed over six years, Professor Sturdy Colls has completed a forensically accurate picture of Treblinka. During the programme, which forms part of Channel 5’s Genius and Genocide season of films about Nazi atrocities, she returns to Treblinka – a location where more than 800,000 Jews, Gypsies and political prisoners were murdered – to complete her work. 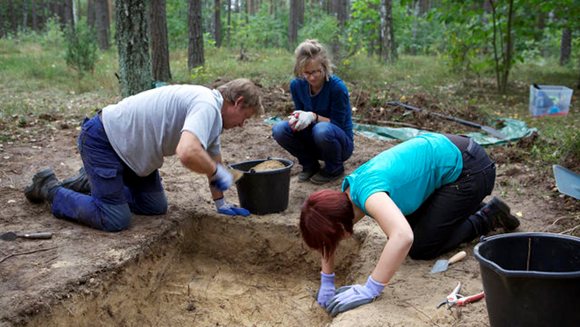 The 2013 season of work at Treblinka was also featured in “Treblinka: Hitler’s Secret Killing Machine” which was first aired on the Smithsonian Channel on the 29th March 2014.

Find out more about our work at Treblinka: