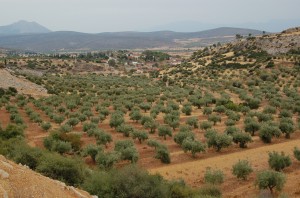 Located 80 miles west of Athens, close to the Bay of Corinth, lies the small village of Thisve. A sleepy, rural settlement, surrounded by olive groves that are inhabited by wild tortoises, Thisve is also home to a wealth of impressive structures and archaeological features that date back to ancient times.

The Centre of Archaeology at Staffordshire University is one of a number of well-established research institutions working as part of the Thisve/Kastorion Project under the direction and project lead of Dr Archie Dunn (University of Birmingham). The project is aimed at furthering our understanding of the ancient Greco-Roman town of Thisve and its Byzantine and Crusader successor, Kastorion.

This small village, approximately 2 hours’ drive from Athens, represents an important multi-period site, which includes monuments and structures from many periods. The work complements the detailed studies of Bronze Age to Roman Thisve and Boeotia that have been produced over many years by other researchers and is co-ordinated with two complementary surveys. All three projects are now processing their data. These are: 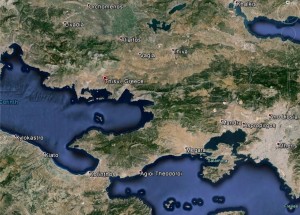 This long-term project began in 2004, with the completion of fieldwork in 2012. It is hoped that the research will generate a robust case study of the relationship between the Pre-Classical-to-late medieval primary settlement complex and the environmental dynamics of its surroundings (the Thisve Basin). This, in turn, will highlight particular aspects of economic activity, such as water-management (ancient to early modern) and medieval silk production, for which the wider region was famous (Boeotia). 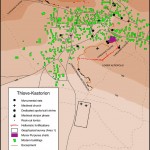 The archaeological field survey utilises a number of non-intrusive methods and technologies to record, illustrate, and investigate the monuments of Thisve, including a number of churches and extramural complexes, the ancient city walls, the Upper and Lower Acropolises, and domestic structures (stone tanks and vats). The majority of these features are complex and multi-phased with architecture dating to several key periods. 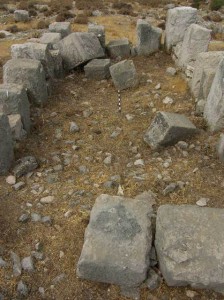 The sites were located and surveyed using a combination of Global Positioning System (GPS) and Electronic Distance Measurer (EDM), including the production of topographic Digital Elevation Models (DEMs). Six key monuments (including two churches, three chapels, a Crusader tower, and extremely well preserved Classical walls) have been scanned using a high-definition three-dimensional laser-scanner to produce fully interactive digital models for interpretation and dissemination. Selected sites and monuments (three churches, a chapel, and an ancient dam described by Greek and Roman authors) have been investigated using a number of sub-surface geophysical techniques such as Ground Penetrating Radar (GPR), Magnetometry, and Electrical Resistance survey.

All data is being presented to the Greek Ministry of Culture and Tourism for use in the development of a strategy for the conservation of the monuments. 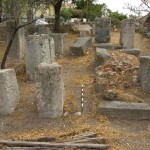 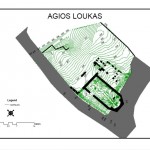 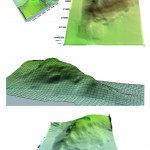 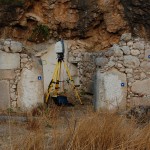 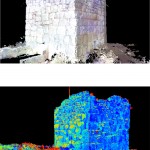 Laser scan of a Crusader Tower 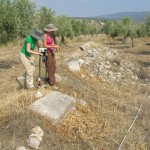