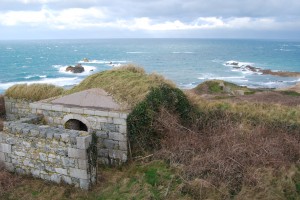 Since 2010, researchers at the Centre of Archaeology have been undertaking historical and archaeological research regarding Alderney as part of the Holocaust Landscapes Project. In March 2022, Professor Caroline Sturdy Colls and Kevin Colls published a book, ‘Adolf Island’: The Nazi Occupation of Alderney’ outlining the results of their work to date.

The third largest of the Channel Islands, Alderney lies just short of 60 miles off the south coast of England, and only eight miles from France. Alderney has a rich and diverse history of settlement. A handful of archaeological investigations on the island, many of which were undertaken in the early 1900s, revealed the existence of material culture dating from the Late Palaeolithic onwards.

In June 1940, the island’s 1500 inhabitants were evacuated. This followed a decision by the British government that the Channel Islands were too difficult and expensive to defend, and paved the way for a period of occupation by the Germans that would last until 16 May 1945.

Through an interdisciplinary methodology, which combines historical research, cartographic and photographic data, and aerial reconnaissance material with non-invasive archaeological survey, archaeology staff and students from Staffordshire University have revealed new insights into the Nazi Occupation.