Between 2016-2019, the Centre of Archaeology joined an international team of experts as part of a major  project that examined the history and legacies of twentieth century internment camps. Funded by the HERA Uses of Past programme, ‘Accessing Campscapes: Inclusive Strategies for Using European Conflicted Heritage’ (iC-ACCESS) considered traces of the 20th century mass violence and terror, as tangible reminders of the “age of extremes”.

In most post-war European countries former Nazi internment camps have become icons of antifascist resistance and the Holocaust, and they have played a consistent role in postwar European memory of totalitarianism and genocide. In the Eastern European centre of the Holocaust and Communist terror, many former ‘terrorscapes’ are still contested spaces where consecutive internments of prisoners by occupying powers and authoritarian regimes transformed the victims of one event into the persecutors of another. This entanglement of remembering with forgetting and the silencing of competing narratives (commonplace in relation to completely unknown forms of historical injustice) show the strong connection between heritage, storytelling and the politics of identity. This poses a serious challenge to museums, remembrance institutions, civil society organizations, social activists, critical academics and educators tasked with the development of new and alternative narratives to make such spaces ever more relevant.

iC-ACCESS therefore examined what has become, in the European context, a dominant set of issues: the dynamics affecting the staging and presentation of some Holocaust camps into heritage, and the forgetting of others; the acknowledgement and presentation of Soviet campscapes in Eastern Europe; conflicted Holocausts, and simmering older ethnic/regional tensions exacerbated by the present EU crisis affecting the identity and future of the European integration project. Therefore, iC-ACCESS addresses the future role of the camps as monuments of the 20th ‘century of camps’ in the dynamic context of the European process of integration and the current age of (financial, geopolitical and refugee) crisis.

The project was a collaboration between University of Amsterdam, NTNU Norwegian University of Science and Technology Trondheim, Staffordshire University, University of West Bohemia Pilsen, Freie Universität Berlin and Universitat Pompeu Fabra Barcelona. Starting from the issue of materiality, the project related forensic research, archaeological practices and historical truth-finding to memory works, narratives and museum display. Innovative pilots used state-of-the-art, hybridised archaeological techniques (digital and non-invasive) in order to identify and visualize hidden material remains within the selected campscapes and at the same time ‘produce’ new meanings regarding unknown or hardly known sites and objects. Over the three years of the project, the team implemented a unique interdisciplinary methodology that drew upon narrative analysis, archaeological investigation, oral history research and digital technologies. 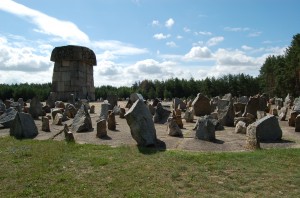