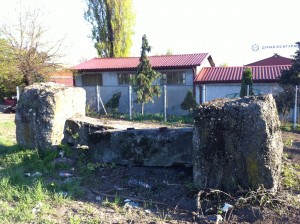 As a result of her much publicised expertise in Holocaust Archaeology, in 2012 Professor Caroline Sturdy Colls, now a founder of Staffordshire University’s Centre of Archaeology, was invited by Goldsmiths College (London) to collaborate in an archaeological investigation of the former Semlin camps at what is known as ‘the Old Fairground’ in Staro Sajmište (Belgrade, Serbia).

Goldsmiths College was in the process of carrying out a Forensic Architecture Research Programme at the site of the camps and it was felt that Professor Sturdy Colls’ involvement would assist in characterising, understanding and raising awareness of the different layers of Staro Sajmište’s history, including the internment and extermination that took place during the Nazi occupation.

Professor Sturdy Colls’ archaeological investigation took place during the Spring and Summer of 2012 when she headed up an interdisciplinary team. The task was initiated as part of the Living Death Camps project and led by the Forensic Architecture Research Group at Goldsmiths College.

The results of the project are published in an archaeological report and a monograph produced by the Forensic Architecture Project. An exhibition of the research was held in March 2014.