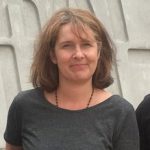 Fiona is an established producer and an Associate Professor of Film Technology. She has pioneered new methods in research informed practice to enhance the digital dissemination of academic research nationally and internationally. She has worked with museums, tourism, heritage sites and channels in the UK and Europe including BBC, ITV, Sky, and The History Channel, as well as BBC Radio creating factual content which has a major impact on society.

From developing and creating digital film content discussing mass Holocaust genocide to missing persons and history Fiona works with Television Channels, museums, charitable organisations and the community. Her methods have had a direct impact on the public nationally and internationally working with UK Police Forces, Universities and local communities.