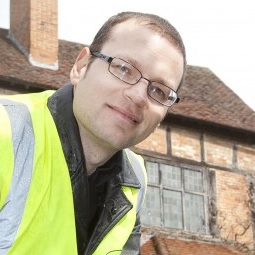 Of his current projects, the highest profile is the prestigious ‘Dig for Shakespeare’ Project in Stratford upon Avon. This globally important project focuses upon the excavation of the final residence of William Shakespeare (called New Place) and the house in which the Bard passed away. This project, and his work on the Scottish Islands, have led to two high profile appearances on television programmes for the BBC (Digging for Britain BBC2, and BBC Alba in Scotland) and the site was the focus of an hour-long Time Team special in 2012 (Channel 4). More recently, he has also been involved in an investigation of Shakespeare’s Tomb using a wide range of advanced non-invasive survey methods and this research was the subject of a major Channel 4 documentary (Shakespeare’s Tomb).

For the past eight years, Kevin has also worked closely with his wife (Professor Caroline Sturdy Colls) on a number of forensic research projects throughout Europe, including the aforementioned projects at Treblinka, Alderney and Staro Sajmiste. He is an active member of the Recording Cultural Genocide and Killing Sites in Jewish Cemeteries and Accessing Campscapes: Inclusive Strategies for Using European Conflicted Heritage projects, bringing his expertise in project management, archaeological field survey and the application of innovative non-invasive techniques to this research. He has also worked with numerous police forces as an external consultant associated with the search for buried human remains and is currently managing a diverse portfolio of major research and commercial projects. Kevin is currently undertaking a PhD which is investigating the archaeological remains on the Isle of Harris, the Western Isles of Scotland, and has research projects focused on Island Archaeology, the archaeology of Shakespeare and the archaeological of Alderney in the Channel Islands.

Working with the Media

Sturdy Colls, C. and Colls, K. (2020) The Heart of Terror: A Forensic and Archaeological Assessment of the Old Gas Chambers at Treblinka. In: Vareka, P. and Symonds, J. Archaeologies of Totalitarianism, Authoritarianism, and Repression: Dark Modernities. Basingstoke: Palgrave Macmillan

Colls K. and Hunter J. (2015) ‘A Changing Hebridean Landscape: Recent Survey And Excavation Along The West Coast of Harris’ International Journal of the North Atlantic, Volume 9, 108-124.

Colls, K. and Hunter J. (2011) ‘Defining the archaeological resource on the Isle of Harris: an assessment of the impact of environmental factors and topography on the identification of buried remains’. In The International Journal of Research into Island Cultures Volume 4, number 2