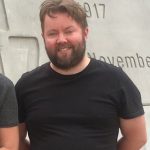 Paul is a senior lecturer and course leader for the BSc Film Production and Interactive Technology course at Staffordshire University. He teaches across a range of film production and film technology subjects with an emphasis on cameras and imaging technology in factual production.

Paul has a background in mechanical engineering and technology where he worked for a number of years in the automotive industry in tool and factory design for major manufacturers such as Ford, Volvo and Jaguar. Paul’s engineering background has given him a practical and efficient approach to his documentary work and research.

After engaging with video as part of the engineering production process Paul moved into broadcast production working on a range of documentaries for SKY, FOXTEL and Channel 5 along with a number of independent projects.

He spent a number of years working on crime programming for SKY dealing with contemporary and historical crimes. He is currently working with a range of colleagues on the dissemination of various archaeology, crime science, history, and heritage projects for broadcast, exhibition and new methods of delivery such as VR and AR.