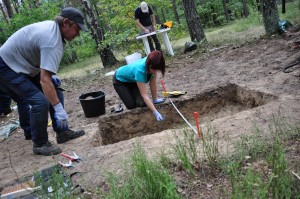 To date, the project at Treblinka has clearly demonstrated that a considerable amount of buried evidence exists in relation to both the extermination and labour camps at Treblinka. The project has sought to map and characterise the landscape of both camps in order to highlight the diversity of the victims’ experiences and the perpetrators’ actions.

Of great importance, is the fact that the majority of work undertaken at Treblinka was non-invasive.  These methods were highly successful in identifying the physical evidence across the site, whilst adhering to Jewish Halacha Law and avoiding the unnecessary disturbance of human remains. Further sites dating to the Holocaust will be studied during future research as part of the Holocaust Landscapes Project owing to the successful application of this methodology at Treblinka.

Permission for the work at Treblinka was obtained from the office of the Chief Rabbi of Poland, who assessed the methodology in terms of its compliance with Halacha Law, the Museum of Struggle and Martyrdom in Treblinka and the Conservator of Monuments, who evaluated the proposal based on its scientific value and potential to enhance knowledge of the site.

The project would not have been possible without the support of these individuals and organisations and without the assistance of all of the experts who participated in the research and fieldwork.

In summary, the project has achieved groundbreaking results:

The results of the project are also being collated into a digital heritage resource, which will be made available to the museum at Treblinka and online as part of the  Re-presenting Treblinka project.