Over the course of several field seasons, the landscape of the extermination camp has been investigated using a number techniques, facilitating a re-interpretation of the site: 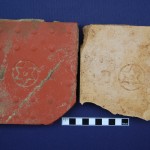 Tiles from the old gas chamber at Treblinka II

Tiles from the old gas chamber

A brooch found near the old gas chamber at Treblinka II

Tiles from the old gas chamber with cement 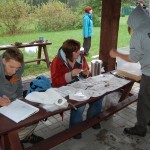 Examining the artifacts found during the investigation at Treblinka 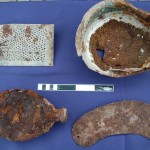 Structural remains of the old gas chamber buried beneath approximately 1m of demolition rubble and artifacts.