Today is Virginia Woolf’s 136th birthday (b. 1882). She is a significant figure in literary modernism and somebody who gave us a number of ways to think about it from both a creative and critical perspective. 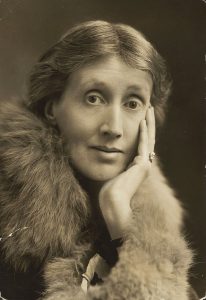 Woolf was highly conscious of the changes in social and cultural arrangements in the early decades of the 20th century.

In her influential essay on the novels of (Stoke’s own) Arnold Bennett, she wrote:

As a result of these shifts and changes, Woolf saw that the modern writer had a responsibility to represent the world in a new way because, as she put it:

Life is not a series of gig-lamps symmetrically arranged; life is a luminous halo, a semi-transparent envelope surrounding us from the beginning of consciousness to the end. (Woolf, ‘Modern Fiction’)

One way of thinking about the effects of these social transformations was the way in which artists represented the human form. Under the stresses of rapid change the body is distorted. Munch’s The Scream, Picasso’s figures and portraits, and Gregor Samsa in Kafka’s ‘The Metamorphosis’ are all familiar examples.

Modernist artists such as Woolf were themselves at the forefront of the processes of modernity, attempting to make sense of the disorder of a complex and confusing world, and seeking new modes of representation appropriate to this flux and fragmentation.

Woolf was the author of influential texts, such as Mrs Dalloway (1925), To the Lighthouse (1927), and the peerless Orlando (1928). Orlando, in particular, plays with ideas of time (a central character who lives from the time of Elizabeth I to the Great War), identity, sexuality and gender (the central character is, at turns, a man, a woman and androgynous).