At the end of June I attended a one-day interdisciplinary conference at York St John University: the title of the conference was “Uplandish: New Perspectives on Northern England’s ‘Wild’ Places”.  The topics which people presented on were very varied and included: film-making, the cultural mythology of the Moors Murderers, the history of Dove Cottage (Wordsworth’s most famous home), and the work of the National Trust in securing UNESCO World Heritage status for the Lake District.  My paper was one of a handful of literary-critical papers that day – it was titled “Sarah Hall’s Wild Women of the North”.

My 20-minute paper gave a brief analysis of the idea of wildness in three novels by Sarah Hall: The Carhullan Army (2006), The Wolf Border (2015) and Haweswater (2002).  I focussed on the presentation of central female characters as embedded within the Cumbrian landscape of all three texts, its ecosystem and the contestation of traditional stereotypes that this entails.  My paper gave a broadly ecofeminist reading of the literature, and made the point that the association of women and nature is not at all retrogressive in Hall’s writing but, rather, is presented as a source of radical energy which enables the women to intervene in political history, as opposed to seeing them excluded from it.

My paper concluded with a question: these novels seem to fit in with a trend in contemporary literature to access the authentic, ecologically-implicated, animal self – an identity which stands in sharp contrast to our increasingly technologically-mediated existence; does this represent a genuine cultural turn developing in the new millennium, or are these just consolatory fictions which we can shut off from when we close the book?

I very much enjoyed giving this paper, as well as the discussions over coffee with other delegates, in particular another academic – Dr. Justin Sausman of the University of Hertfordshire – who also presented on Haweswater.  Another personal highlight for me was having the opportunity to quote a small section of Beowulf in Anglo Saxon (yes, it was relevant to a discussion about the literary history of monstrosity and the moors!).

York is just lovely – you should go, especially if you really like a bit of Viking history mixed in with your organic cafes and high-end clothing stores.

My thanks to the University for funding my trip.  Next stop: a conference on Eco-Gothic in Dublin, Trinity College, late November – yey!

The Class of 2017 graduated at the picturesque Trentham Gardens this week.

Congratulations to everybody who completed their degrees this year. We were all so proud to share your day on Monday. Congratulations, too, to this year’s prize winners; Sian Davies, Ben Underwood and Susan Ecclestone. Here’s some of the pictures we managed to grab (see the facebook page for more). 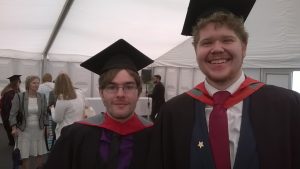 “history is not the past – it is the method we have evolved of organising our ignorance of the past. It’s the record of what’s left on the record. It’s the plan of the positions taken, when we to stop the dance to note them down. It’s what’s left in the sieve when the centuries have run through it – a few stones, scraps of writing, scraps of cloth. It is no more “the past” than a birth certificate is a birth, or a script is a performance, or a map is a journey. It is the multiplication of the evidence of fallible and biased witnesses, combined with incomplete accounts of actions not fully understood by the people who performed them. It’s no more than the best we can do, and often it falls short of that.”

Hayden White, somebody who we might characterise as a ‘postmodern historian’, similarly claims that all history is text, and is subject to the same subjective interpretative understandings and misunderstandings as any other piece of writing. In addition, the historical record is often in the hands of those wishing to put their side of events, and it is history’s winners whose version gets to become the ‘official’ history. White identifies how events don’t always fit into the comforting structures of narrative, how events don’t always lend themselves to a beginning, a middle and an end. In The Content of the Form: Narrative Discourse and Historical Representation, he argues that:

‘But real events should not speak, should not tell themselves. Real events should simply be. …The lateness of the invention of historical discourse in human history and the difficulty of sustaining it in times of cultural breakdown (as in the early Middle Ages) suggest the artificiality of the notion that real events could “speak themselves” or be represented as “telling their own story”…. It is because real events do not offer themselves as stories that narrativization is so difficult.’

History then, as Mantel identifies above, is an unreliable witness to the events of the past, and we can never recover them with any objective clarity. As Mantel says, ‘history …. is the method we have evolved of organising our ignorance of the past.’ The unreliable nature of history, and who controls the official record, have concerned many great writers of recent years. Toni Morrison has explored the legacy of slavery in black communities, Tim O’Brien has wrestled with the un-tellable story of Vietnam, and E L Doctorow has fictionalised the histories of those marginalised and ignored by the official historical record. From these writers, I teach Song of Solomon (but Beloved is probably Morrison’s finest achievement), In the Lake of the Woods, and The Book of Daniel. From these texts, we learn that history has competing interpretations of the past, and the un-official histories of the unvoiced has an equal claim to be heard.

You can listen to the Reith Lectures on the BBC iPlayer.