On Wednesday 16th December, Ray Johnson led a cast of actors at the Stoke Film Theatre in a reading of a previously unpublished play by Arthur Berry “Whatever Happened to Phoebe Salt”. This drama, edited by Deborah McAndrew for the occasion, concerns the trials and tribulations of a local working-class girl who yearns for something beyond the confines of her class and sex. Discontent has prompted Phoebe to take employment as a showman’s assistant and to string along two lovers (the dull but faithful childhood sweetheart and a more exciting married man – the local butcher). Incorporated in this sometimes farcical tragi-comedy is a tale of incest worthy of the ancient Greeks (Berry typically winks towards the classical while taking his own demotic road). In the end Phoebe’s attempts to traduce her fate are apparently in vain as she suffers the consequence of playing the field and gets up the spout. Though not all the actors quite mastered the Potteries accent – a difficult one – they overcame the issue of staging (or lack of it). A row of seated speakers in mufti is not promising; in fact full advantage was taken of the limited movement the arrangement allowed to realise a dynamic comic performance made easier, no doubt, by Berry’s earthy lyricism. 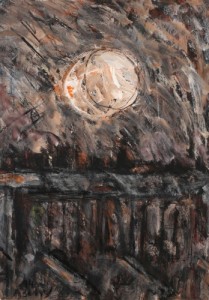 The next evening “Jazz, Beer and Oatcakes” was on at the Potteries Museum in Hanley. This was again led by Ray Johnson and inspired by another ‘lost’ recording of Arthur Berry by Arthur Wood: “Obsessed by Oatcakes” (Radio Stoke, 1978). Oatcakes were indeed consumed, though the inevitable salad garnish was not, I would venture, quite in the spirit of a man so enamoured of stodge. Clips of Berry’s peerless voice were interspersed with film clips, readings and songs from jazz ensemble Fine and Dandy. A certain amount of audience participation was the order of the day and the pre-Christmas crowd quite willingly raised voices and glasses to the not-too-difficult refrain “Oatcakes! Oatcakes!” It was a jolly evening, another event to accompany the successful exhibition: “Lowry and Berry: Observers of Modern Life” – now extended until January 17th!