There has been much controversy this week over the diversity of the undergraduate syllabus at Cambridge. Here, some Staffs Uni lecturers dwell on the ways in which we hope to make our teaching relevant to the complex world we all live in:

“I was just reading about this in the Evening Standard, and thinking about my own list of 5 set-text novels for the Adaptation module. James Baldwin (Giovanni’s Room), and Chinua Achebe (Things Fall Apart) rub shoulders with Camus, Doris Lessing & Edith Wharton (the main criteria for their selection was that they be short ‘modern classics’ (ones that I love), and adaptable to cinema.

Interstingly (or ironically), both Baldwin and Achebe fall foul of political correctness in their own right (Baldwin sinning against cross-dressers, Achebe asking us to sympathise with a wife-beater), which in no way detracts from their greatness, any more than Kipling’s colonial perspective detracts from his.

All v interesting. I was discussing the concept of the canon with 3rd years in week 1 and it was generally agreed it should simply be added to – don’t throw baby out with bathwater.” Margaret Leclere.

“I also teach Achebe’s Things Fall Apart and 4 others from that list of 10 (Beloved, Lonely Londoners, TGOSTings, Wide Sargasso Sea – and Jean Rhys was white, by the way!, not BMEthnic as the article claims).

I run a year-long module called Global Voices: Stories of Empire which contains only two white writers – Albert Camus and Jean Rhys, both of whom write prose which mines deep into the complex cultural psychology of the colonised nation.  My module on Magical Realism also features the work of so-called “BAME” writers such as Amy Tan (Chinese-American), Toni Morrison (African-American), Salman Rushdie (Indian) and Luke Sutherland (black British).  On this module we also read work by Laura Esquivel (Mexican) and Gabriel Garcia Marquez (Colombian); although these writers might not be thought of as ‘minority-ethnic’ in the UK, Hispanic cultures are aligned as ‘minority-ethnic’ in the USA.

As you can see from my job title – “Senior Lecturer in Literary Studies”- , I even reject the term “English Literature” to describe my subject area: Camus and Marquez we read in translation – how on earth can we consider them to be “English” in any sense, and a lot of the literature which I put on my modules may have been written in English, but it is written in countries a long way from England where the main language may not be English at all.  In my view, the label “English Literature” gives a sense of primacy to the English language, English culture and British (English) imperial practices of the past from which I like to distance myself in my work in order that I can more clearly understand the ‘voices’ and the literary art of people so long considered to be ‘Other’ to all that is English.” Melanie Ebdon.

“My PhD was in African American experimental poetry. I teach contemporary African American poetry (e.g. Nathaniel Mackey, Harryette Mullen– I’ve published a chapter on her for an edited collection with Ashgate), Black British and Asian poetry (e.g. Patience Agbabi, Nabila Jameel, Daljit Nagra). Like Mel, when anyone asks me what I teach, I tell them ‘Literature’ not ‘English Literature’ for the same reasons (though I can accept “Literature in English or English translation”). I also teach Pound, Eliot, Baudelaire, Whitman– there is a range of diversity in all the texts we teach.” Lisa Mansell

“American literature has always been open to the experiences of marginalised groups – regardless of the nature of the inequality. I teach the Harlem Renaissance (Zora Neale Hurston and Nella Larsen’s beautiful and poetic Passing) and slave narrative (Frederick Douglas). More recently, Native American writers (such as Sherman Alexie) and African American writers (such as last year’s Man Booker winner, Paul Beatty) have revealed the stupidity of segregation and racism through humour. Toni Morrison’s Civil Rights era novel, Song of Solomon, is a powerful exploration of the tensions in the politics of race, identity and resistance, combined with a lyrical examination of the power and problematical nature of oral cultures.” Mark Brown

The Man Booker prize has been won by an experimental first novel that was 5 years in the writing. Lincoln in the Bardo is written from the perspective of Abraham Lincoln’s dead son and a host of other souls speaking from a limbo between life and death (the Tibetan belief of Bardo).

In interviews today Saunders has spoken about how the structure of the book – with dozens of narrative voices – has been a significant challenge, and how literature has the power to see the world from the perspective of others. Interestingly, President Trump is very proud of how few books he has read! Go figure.

Writing about his own creative practice in the Guardian recently, he said ‘An artist works outside the realm of strict logic. Simply knowing one’s intention and then executing it does not make good art. Artists know this. According to Donald Barthelme: “The writer is that person who, embarking upon her task, does not know what to do.” …. Einstein, always the smarty-pants, outdid them both: “No worthy problem is ever solved in the plane of its original conception.”

Saunders is the 2nd American to win the prize, after Paul Beatty last year. 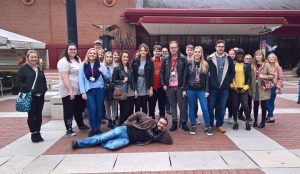 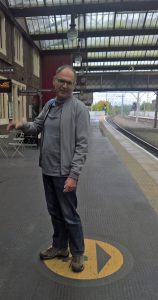