Our English and Creative writing group had the fantastic opportunity to go on a Shakespearian adventure to Stratford-Upon-Avon. On Friday 20th January, we set off at 3pm to the town of Alveston where our youth hostel was situated. When we arrived at Hemmingford House we were allocated our dorm rooms. We only had time for a quick freshen up as our departure to Stratford was imminent. We took a short journey into town and managed to locate quickly a nice local pub for some refreshments. After feeling restored we headed on down to the Royal Shakespeare Company to watch The Tempest. We were situated down the right-hand side of the stage and the view was particularly good. I personally had no previous knowledge of the play, so I was expecting to struggle with the plot and dialogue. However, I was proven wrong. The actors and actresses performed The Tempest clearly and dramatically. They made full use of the staging; hidden plinths arising from the stage floor and wooden trees that could even resemble a ship depending on the scene. Their use of technology should not be overlooked either as the sound and lighting effects produced larger characters and brought beasts to life. The play itself is set on a remote island where a sorcerer and his daughter have been stranded for 12 years. He then uses his magic to conjure a storm to shipwreck the men responsible for his banishment. Romance, comedy, and tragedy are all added along the way of the sorcerer’s journey back home. We all thoroughly enjoyed the play. As a first timer to the Royal Shakespeare Company, I can assure you I will be going again.

After some post theatre drinks, we retreated to our dorm rooms. The following day we headed back into Stratford where we split up into groups to do some sightseeing. Amy, Becky, and myself decided to go and see Anne Hathaway’s house which was a reasonable walk out of town. When we got there, we walked through the gardens to the cottage where she lived with William Shakespeare. On arrival, there was a female tour guide who was telling us that William Shakespeare would often come to the cottage and write between plays. He would often leave his wife and children behind when he went to London due to the poor living conditions in the overpopulated city. She also told us the average life expectancy in London at that time would be around 20-30 years old, whereas in Stratford it would be much longer of around 40-50 years old. She went on to say that this was because of the clean air in the countryside and that they were living from their own land. After a brief question and answer session we explored the rest of the house.

A group us from our English and Creative Writing group attended the New Vic Theatre on Monday 6th February to watch Cyrano de Bergerac. This is a play adapted by Deborah McAndrew and directed/composed by her husband Conrad Nelson. Deborah was instantly recognisable to us all as a regular in Coronation Street in the 90’s, as she played a character called Angie Freeman. Cyrano was performed by the award winning Northern Broadsides in a round theatre. Different props and lighting were used to set the scene for a variety of different places in Paris: a playhouse, a bakery, outside Roxanne’s window, the frontline and a nunnery.

Cyrano is set in Paris around 1640. Cyrano is a poet and is madly in love with his cousin, Roxanne. However, he is reluctant to tell Roxanne of his feelings due to the fact he has an enormous nose! Cyrano becomes acquainted to Christian who Roxanne confesses her undying love for. With Christian’s good looks and the use of Cyrano’s poetic words he manages to marry Roxanne. However, with Cyrano and Christian both off to war, who will survive to win Roxanne’s heart once and for all. Will Roxanne ever know the truth about Cyrano’s feelings or will Christian run out of words. Cyrano is a musical musketeer marvel. With poetic readings mixed with swashbucklers, bakers, and nuns, expect a journey into the unknown. The actors that were exceptional were Cyrano and Monfleury as they both had heavy dialogue mixed in with singing and playing musical instruments. They were entertaining, comical, and dramatic. That nose is not to be missed! (Lynn Statham, 1st Year English and Creative Writing) 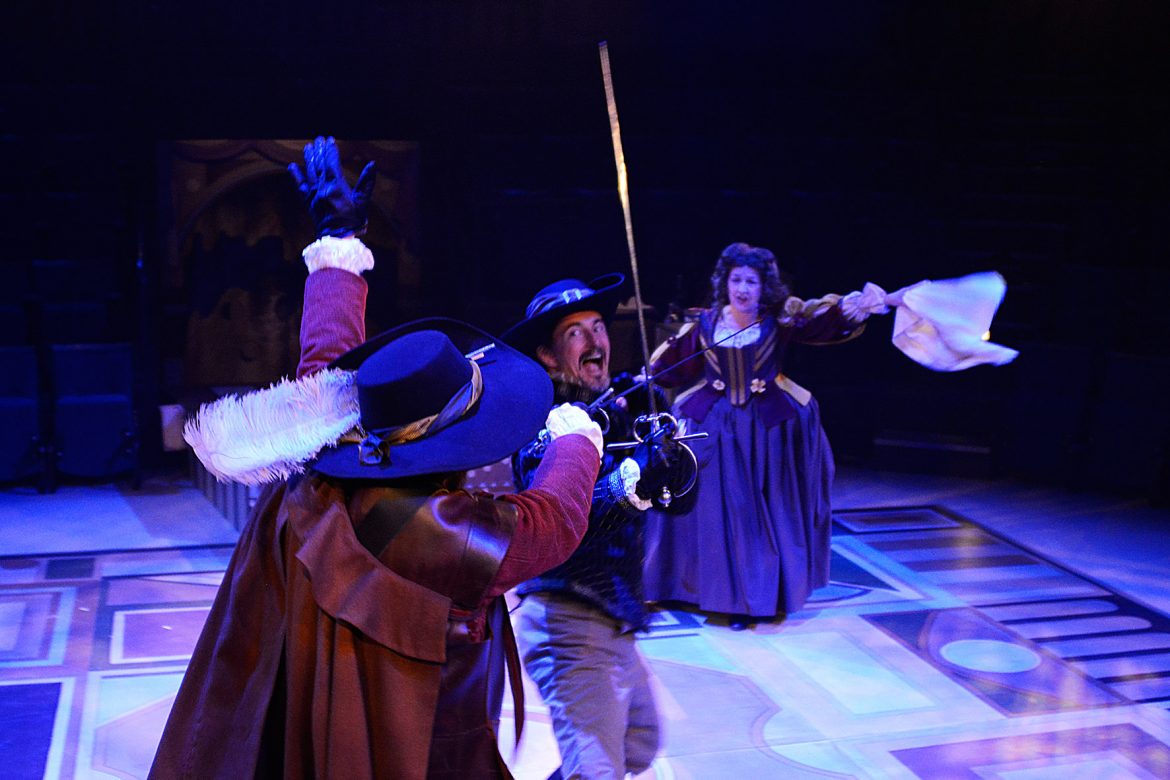