I recently had the pleasant though difficult task of judging the Heritage category at the Three Counties Open Art Exhibition administered by Keele University at the Burslem School of Art.  Heritage, of course, has many aspects, encompassing the built environment and remnants of the industrial past as well as less tangible manifestations.

The Exhibition features many such – from a museum interior, to images of Stoke-on-Trent’s steelworks and potbanks (Francis Proudlove), to the cultural heritage of football and pubs (Geoffrey Wynne), with their undeniable emotional resonance.  Any one of these would have been a worthy winner.  Upstairs in the Arthur Berry room is a concurrent exhibition, ‘Common Ground’ by Ian Mood, inspired by the artist’s close family history as well as Stoke-on-Trent’s urban landscape.

The work chosen for the Heritage prize, after no small degree of agonising and with the help of sponsor Ford Green Hall’s Neil Dawson, was a small collage in the upstairs gallery, 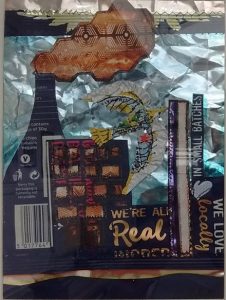 Rising.   Created by Stoke-on-Trent’s Sheena Kelly, it is a stitched collage in ‘mixed media’ depicting a smoking kiln, factory building and canal.  Fragments of text: ‘we love locally’, ‘in small batches’ etc. also suggest pottery production – a particularly artisanal industry.  The slightly naïve execution references Stoke-on-Trent’s industrial heritage, but also comprises a witty commentary on the current state of the city along with the global problem of waste production and disposal.

The term ‘mixed-media’ can hide a multitude – Rising is made of refuse, bits of old packaging.  One connotation is the waste of the pottery industry and its workers.  But there is a positive spin – not least in the title: just as rubbish is recycled into art, the industrial heritage buildings depicted here are being turned to new use.  Middleport Pottery, still successfully producing Burleigh ware, is currently hosting the Weeping Windows ceramic poppies installation.  This is expected to generate a significant influx of cultural tourism in Burslem and beyond.  Empty shops are hosting pop-up art events and all over the city heritage buildings are being turned to new uses.

Enquiry to a delighted Sheena revealed that much of the material was provided by a packet of Kettle chips.  In the service of research I purchased two packets myself – Sea Salt & Crushed Black Peppercorns and ‘Sea Salt and Balsamic Vinegar of Modena’. These are marketed as proper posh crisps: ‘hand cooked’, ‘absolutely nothing artificial’ – their credentials to authenticity and the artisanal are loudly trumpeted. 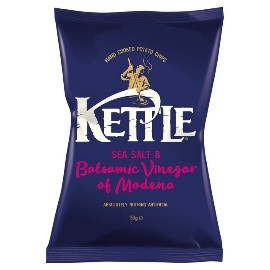 A quick visit to the kettlebrand.com website reveals reassuring information on the company’s sustainability practices: ‘Sustainability comes first’, we are told; ‘our natural promise extends beyond the ingredients’.  The tone is mildly patronising, puns aside: ‘We’re chipping in to live in harmony with the environment around us . . . .   The truth is, we all need to care for the planet.‘  However, they sorrowfully admit, it has not yet been possible to find an environmentally friendly form of packaging which would protect ‘the quality and freshiness of our product all the way to your favorite chip bowl’.  Hence, at the moment, each packet bears what we might dub the mark of McCain, also incorporated in Rising: ‘Sorry, this package is not currently recyclable.’  I suspect the truth of the matter is that they haven’t been able to find an environmentally friendly form of packaging that would not impact negatively on the bottom line.  Kettle is not the only brand to feature in Rising: a bird (dove?) flying upwards across the middle ground is made of a San Pellegrino ‘Eco-lid’ – 100% recyclable, apparently, but pretty much redundant and serving rather to confirm the pretensions of this pricey Euro-pop.  (Parent company Nestle scandalously promoted powdered baby milk in developing countries back in the day.)

Kettle chips, in common with most successful brands, has been subject in its short history to multiple merger and takeovers.  At one point it shared a stable (Kellog’s) with its polar opposite in crisp terms, the reformed and apparently pre-masticated aberration of a potato snack that is Pringles – “once you pop you can’t stop”.  It is currently owned by Campbells Soup, whose flagship product spawned perhaps the most iconic food art of the twentieth century – Andy Warhol’s pop-art Campbell Soup Cans (1962, MoMA). 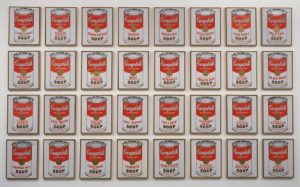 Ironically, given the mass-produced subject and advertising by which Warhol was inspired, the medium here is painted canvas – a separate painting for each of the 32 flavors.

Rising, then, is part of a now rather august tradition commenting on consumer culture.  We are all aware of the gaps between rhetoric and reality generated by organisations in their marketing and PR.  Kelly has cleverly recycled this rubbish while speaking gently of the Potteries industrial past and its pain and looking optimistically to the future.