Two drunken tramps discover a huge bell hanging from what appears to be an enormous chandelier. The bell’s rings summon a court of comic and grotesque fairy tale characters – a king, a queen, a troubadour, a jester, and sprite like figures who illuminate the the outdoor arena with fiery torches. After some drama to illustrate their roles, the fairy tale characters take their places on the chandelier before being hoisted way above the heads of the audience. What follows is a mesmerisingly choreographed combination of drums and bells, acrobatics and technical wizadry. The music played by the courtiers carries us through lulls and crescendos; the sprites perform on ropes, swings and trapezes way above us; and the chandelier itself changes height and shape as it is illuminated in a constantly transforming show of light, dark and shadow.

This is Appetite’s fourth major show in Hanley Central Forest Park. All four have been triumphs and this one is up there with my so-far-favourite, The Bell (a promenade performance about the futility of war with acrobats, fire, explosions and opera – oh, and a bell!). 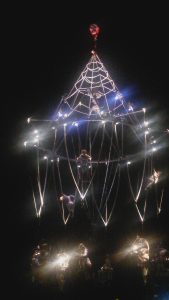 Appetite is an Arts Council funded body who, in collaboration with the New Vic theatre, stage accessible and and often interactive arts events for the communities of North Staffordshire. A recent city centre event celebrated the originator of the modern circus, Philip Astley, who came from Newcastle under Lyme. Staffs Uni English and Creative Writing students have volunteered and undertaken work placements with Appetite who continue to do great work across the region.

See what else is on this summer here