I don’t think that I can do justice to Paris in writing. Even Charles Baudelaire, the 19th century poet of Paris (the poet of Paris, note, rather than a Parisian poet), was sensitive to the troubling nature of writing about Paris when he asked in Le Spleen de Paris (1869):

”Who among us has not dreamt, in moments of ambition, of the miracle of a poetic prose, musical without rhythm and rhyme, supple and staccato enough to adapt to the lyrical stirrings of the soul, the undulations of dreams, and sudden leaps of consciousness. This obsessive idea is above all a child of giant cities, of the intersecting of their myriad relations.”

A group of 1st and 2nd year students set off at way-too-early O’clock on Saturday morning and reached our hotel near the Gare du Nord in the early afternoon, leaving time for a trip to Montparnasse and the Sacre Coeur, followed by dinner in a properly Parisian bistro.

Sunday morning we were at the Musee d’Orsay to see the great impressionist and post-impressionist works of Monet, Manet, Gustave Caillebotte (it’s important to have a bottle of wine when doing a spot of sanding) and Van Gogh (amongst many others).

In the afternoon we found ourselves underground with the Paris dead in the catacombs (we suspect that some of the inhabitants hadn’t survived the queue outside) and in the evening saw Paris at night from the Eiffel Tower.

Monday morning we visited Notre Dame and the famous hang-out of Paris’s modernist literati (Joyce, Hemingway and Stein amongst them), the Shakespeare and Co bookshop (with Aggie the book-loving cat). 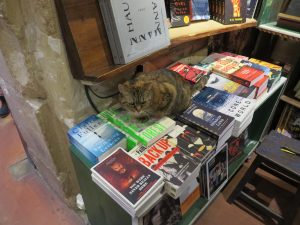 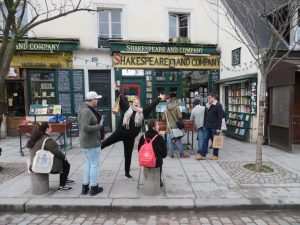