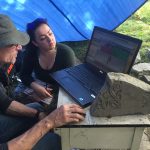 A major new research and reconciliation project exploring cultural and physical genocide in Jewish cemeteries launched this month with the mapping and restoration of Oświęcim Jewish cemetery (Poland).

The cemetery was desecrated by the Nazis during the Second World War and the matzevah were damaged and removed from the cemetery to be used in construction projects. The Nazis also constructed a camp on the cemetery grounds after the Jewish community was prevented from undertaking burials there.

An interdisciplinary, international team from Staffordshire University (UK), The Matzevah Foundation (US) and Fundacja Zapomniane (Poland) located and recorded matzevah within the cemetery grounds using a wide range of forensic archaeological methods. The project, which was led by Dr Caroline Sturdy Colls from Staffordshire University, utilised non-invasive techniques such as Total Station mapping, photogrammetry, laser scanning and Ground Penetrating Radar (GPR) to create the first accurate plan of the cemetery and the surviving matzevah, to document surviving evidence of the desecration of the cemetery by the Nazis during the war and post-war vandalism, and to identify any below ground evidence of cultural and physical genocide. Drawing upon methods from the digital humanities and games technology, the team will create a highly detailed 3D visualisation of the cemetery and individual matzevah.

“Using a wide range of techniques, the project team have documented the complete and fragmented matzevah in the cemetery, and recorded the above- and below-ground evidence of relating to the Nazi desecration of the area. This information will provide new insights into the nature of cultural and physical genocide at the site, provide a wealth of material for researchers interested in pre-war Jewish life and lead to the development of educational tools relating to Jewish heritage and the Holocaust.”

“Since 2013 teams of volunteers from The Matzevah Foundation (TMF) have cleaned the undergrowth and debris in the Jewish cemetery. However, since 2014 volunteers from TMF, Action Reconciliation (ASF) and local volunteers have repaired several sections of the exterior wall, set matzevot in 25  concrete stands and this year installed a gravel path to connect sidewalks leading to an ohel in the rear of the cemetery. All of our work is directed toward honouring and preserving the Jewish heritage of Oświęcim.”

The work forms part of the “Recording Cultural Genocide and Killing Sites in Jewish Cemeteries Project” which is funded by the International Holocaust Remembrance Alliance. This project seeks to raise awareness of the causes and consequences of cultural and physical genocide (using Jewish cemeteries desecrated by the Nazis as a pilot case study), in order to directly tackle racism, xenophobia and hostility in the present. The project will run for two years. The results of the survey in Oświęcim will be available in the spring of 2017.