Dr Caroline Sturdy Colls, Associate Professor of Forensic Archaeology and Genocide Investigation at Staffordshire University, has been awarded the European Archaeological Heritage Prize 2016. The prize, awarded by the European Association of Archaeologists (EAA), was presented at the Palace of the Grand Dukes of Lithuania in Vilnius on the 31st August. 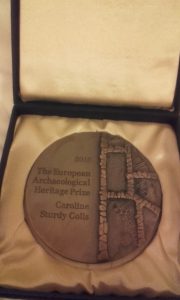 The EAA state that “The European Archaeological Heritage Prize is awarded annually to an individual, institution, or to a local or regional government for an outstanding contribution to the protection and presentation of the European archaeological heritage”.

Dr Sturdy Colls received the award in recognition of her research concerning Nazi-German terror in camps and at massacre sites across Europe.

At the ceremony, Franco Nicolis, a member of the EAA Committee said:

“By awarding the European Archaeological Heritage Prize 2016, to Dr Caroline Sturdy Colls, the EAA wants to endorse and encourage her unique work that has demonstrated the power of archaeology by adding crucial insights to a European heritage that represents some of the darkest moments of our history. It is a darkness that must remain exposed and understood by us, now and in the future so that we can confront it in whatever guise it might threaten us again.”

Dr Sturdy Colls’ work has included investigations at Treblinka extermination and labour camps in Poland, Semlin in Serbia, Bergen-Belsen in Germany, Adampol and Oświęcim in Poland, and on the island of Alderney in the British Channel Islands. She has pioneered a sub-discipline that has focused on the application of forensic and archaeological methods at Holocaust sites. This work has led to the identification and characterization of mass graves, camps and killing sites. Dr Sturdy Colls has published widely on her work and has participated in a wide range of educational programmes in order to disseminate her findings. Most recently, she has curated Finding Treblinka (along with Michael Branthwaite), which opened as a permanent exhibition at the Museum of Struggle and Martyrdom in Treblinka in August 2015 and which will run as a temporary exhibition at the Wiener Library in London from July-October 2016.

In September 2016, Dr Sturdy Colls will be the Fred and Maria Devinki Memorial Fellow, at the Jack, Joseph and Morton Mandel Center for Advanced Holocaust Studies, United States Holocaust Memorial Museum. During this fellowship, she will undertake research for a monograph focused on her work at Treblinka extermination and labour camps to date. As Dr Sturdy Colls is in the United States, the award was accepted in Vilnius by her husband and fellow archaeologist Kevin Colls.

On receiving the award, Dr Sturdy Colls referred to the motivations behind her work:

“I am deeply honoured to received the European Archaeological Heritage Prize 2016 and I am delighted that the archaeological community has recognized the importance of investigating the Holocaust and historic crimes against humanity.

Throughout the course of my research, I have had the honour and privilege of meeting many Holocaust survivors and descendants. It is for them, that I do this work. For seventy years after the Holocaust, many still need answers regarding the fate of their loved ones. Forensic archaeological methods offer the opportunity to provide at least some of these answers – to find mass graves and raise awareness of the crimes perpetrated during this period. 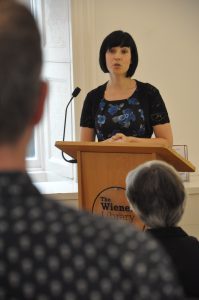 Archaeological investigations at Holocaust sites offer us the opportunity to challenge popular myths and misconceptions; to answer the questions that historical research cannot; to encourage people who have never previously taken an interest in this subject to explore its historical and contemporary relevance, and – perhaps most importantly – to bring people together from a variety of backgrounds to discuss the causes and consequences of genocide”.

Dr Sturdy Colls also said that this work would not have been possible without the support of a wide range of fellow archaeologists and heritage professionals, Holocaust survivors and their families, and religious leaders across Europe.

“I accept this award today on behalf of many other people who have helped me with my investigation of Nazi crimes. Together I hope we have, and will continue to, bring to light new information about the Holocaust and where intolerance can lead”.