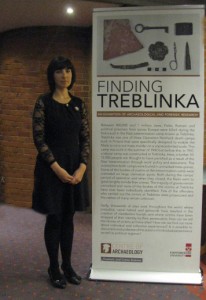 The Centre of Archaeology marked Holocaust Memorial Day this year by the launch of a new Treblinka exhibition, accompanied by a series of presentations and a powerful documentary play, “Yizkor”.

The event, hosted by the New Vic Theatre in Newcastle-under-Lyme on 27th January 2015, was attended by hundreds of people from across the county. The theme of the event this year was “Keep the memory alive” and it took place on the 70th anniversary of the liberation of Auschwitz.

The exhibition, “Finding Treblinka: An Exhibition of Archaeological and Forensic Research” was shown for the first time to attendees of the Holocaust Memorial Day, in conjunction with a program of presentations and performances. Dr Caroline Sturdy Colls, Associate Professor of Forensic Archaeology and Genocide Investigation, gave a lecture highlighting the importance and significance of the research and fieldwork carried out at Treblinka, Poland.

Hifsa Haroon-Iqbal MBE DL gave a short, thought-provoking presentation followed by a reading of the Kaddish from a representative from Stoke-on-Trent & North Staffs Hebrew Congregation.

The presentations were followed by a documentary play called Yizkor written and directed by Borderlines director Sue Moffat and starring Esther Green and Kyle Ross. The play was inspired and narrated by Holocaust survivors Ibi and Wal Ginsberg.